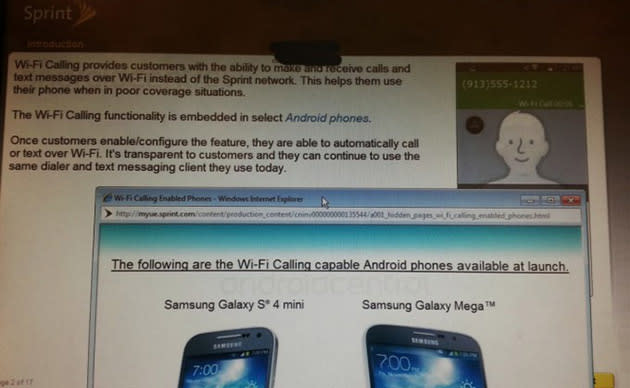 Upgrading your plan may be a good way to avoid overage charges, but Sprint might have another option: WiFi calling. According to documents obtained by Android Central, the carrier is poised to give select Android phones the ability to call and text over a local connection, similar to T-Mobile's service. The Samsung Galaxy S4 mini and Galaxy Mega are reportedly the first handsets that will have access to the service, but it'll also be available to future devices running Android 4.2 or higher. It does have limitations, though, and will only work if you're already within the confines of the network's CDMA signal. We've reached out to Sprint for confirmation (and more info), and we'll update you when we hear back.

In this article: GalaxyMega, GalaxyS4Mini, mobilepostcross, sprint, WifiCalling
All products recommended by Engadget are selected by our editorial team, independent of our parent company. Some of our stories include affiliate links. If you buy something through one of these links, we may earn an affiliate commission.