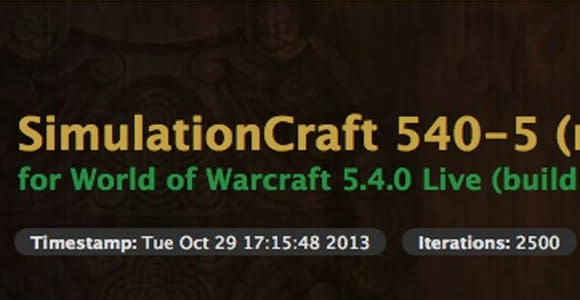 If you're anything like me, just reading that word filled you with a sudden sense of intimidation, inferiority, awe ... and, whoa. Wait a minute. What's that other emotion huddled there in the corner, being beaten up by our fear of failure? Is that curiosity?

So, great, you're interested. Now what? How the heck does a person get started, especially when theorycrafting seems so complicated?

Just last week, our very own warlock columnist Megan O'Neill (@slowpoker), her dark magic-enhanced ears ever attuned to the Twitwaves, chimed into an ongoing conversation about SimulationCraft, one of WoW's most well-known and highly regarded theorycrafting sandboxes, with an innocent question:

@TheckPhD @SvelteKumquat stupid question, but how does one learn how SimC works w/o contributing?

From this humble beginning emerged a lengthy tweetversation (that link is just part of the discussion; it branched out into a few side conversations as well) involving several top theorycrafters. It even led one of them, Arielle (a WoW blogger, podcaster and all-around guardian druid PvE expert), to write a blog entry that is an absolute must-read for anyone considering a try at theorycrafting.

The key, Arielle notes, is to remember that we've all gotta start somewhere. For him, his walk down that road began with a single question that nobody else had answered:

When the pre-Cataclysm patch hit, Swipe was doing basically no damage. It was actually causing some pretty significant problems for Bear tanks (including myself) that were still dallying around in ICC. I looked around the on the forums, and didn't see anything that would explain why this had started happening. Since nobody else appeared to be doing anything, I took it upon myself to do some digging. Back then I didn't do any sort of empirical evidence gathering – or turn out to be right even – I did dig deep enough to get a response from a Blizzard CM. That got me noticed by a couple people. ...

I had gotten a taste of what it felt like to be recognized.....and to be honest I liked it.

Over the rest of his blog entry, Arielle walks through some of the most important fundamental rules of the road to remember if you decide to give theorycrafting a go, which I'll take some liberties and paraphrase here:On a personal note, I want to point out that I don't think of myself as a theorycrafter (and I think my rogue columns reflect this). I can take part in some of those conversations and almost understand what's being said sometimes, but I mostly lack the one trait that I've found is almost universal among every skilled theorycrafter I know: a laser-like, almost obsessive focus on using math and logic to painstakingly pick apart questions like they're a knotted-up ball of string that must be unraveled.

There's a love of science at the core of many theorycrafters: the knowledge that WoW operates by a (often very complex) set of rules, and that any problem has a solution if you carefully work through it.

If this sounds at all like you, then read Arielle's blog post, find yourself a question in need of an answer, and get to work.

And if you run into any issues along the way? Leave your pride on your side of the monitor and ask another theorycrafter for help or advice. They may seem like elitist jerks from afar, but it turns out that the vast majority of the game's best theorycrafters are also very approachable, funny, friendly, genuine, good folks -- and they're eager to help aspiring theorycrafters join the ranks.

Just remember: Joining the theorycrafting community is not much different from joining just about any community. You start on the outside, and you need to prove yourself before you can be fully welcomed into the fold. Be patient, be friendly, be open and willing to learn. And be ready to make mistakes. They will happen, and they'll be embarrassing -- but the mark of a great theorycrafter is the ability to learn from those mistakes and do better next time.
In this article: how-to-theorycraft, theorycrafting, wow-theorycraft-guide
All products recommended by Engadget are selected by our editorial team, independent of our parent company. Some of our stories include affiliate links. If you buy something through one of these links, we may earn an affiliate commission.