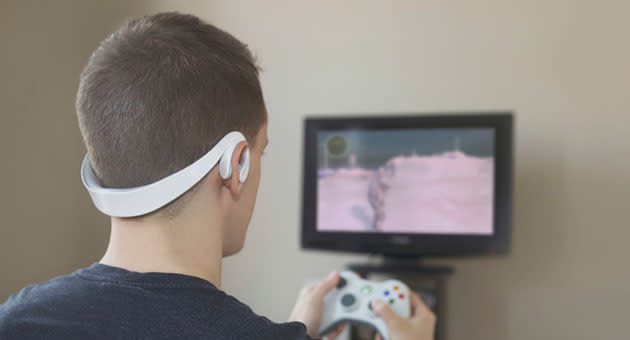 Designer Sam Matson has a solution to gamer rage that doesn't involve throwing things at your screen. Introducing Immersion, a headset that monitors your heart rate and increases a game's difficulty the more frustrated you become.

It may sound like a heart attack waiting to happen, but the point is to help you control anger rather than let it escalate. Matson designed a shooter-style game on the Unity platform, adding in the ability to interpret a player's pulse rate. Data from the headset's optical pulse sensor is sent to the game via Bluetooth, resulting in even more hopeless combat when you're getting aggravated. The inspiration behind the headset? Matson's brother, whose Call of Duty skills were sinking as he became increasingly frustrated.

Immersion isn't commercially available yet -- and we're not sure how many gamers would appreciate this counterintuitive approach to minimizing anger -- but we can definitely see the headset integrating with other sensor-laden gaming tech like the Oculus Rift to track mood changes in addition to your body's movements. Check out the prototype via the source link below.

In this article: biometrics, gamer rage, gaming, immersion headset, sam matson, sensor
All products recommended by Engadget are selected by our editorial team, independent of our parent company. Some of our stories include affiliate links. If you buy something through one of these links, we may earn an affiliate commission.