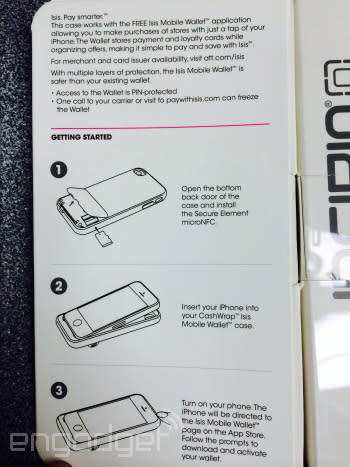 If you've been waiting to make NFC payments with little more than your iPhone and an Isis account, we have news for you. A tipster sent us pictures of what looks to be retail packaging for the Incipio Cashwrap, along with supposed pricing information. The Cashwrap enables secure mobile payments via a micro-NFC chip and a mobile app and it'll be available from AT&T for $70 according to our reader, with variants for most of Apple's recent smartphones. What's more, this info aligns nicely with what 9to5Mac learned about the product at CES 2013. Our source says that the case is already in AT&T's inventory too, meaning technically you could buy one right now, but you probably shouldn't press your luck until there's an official announcement. Unlike Incipio's other iPhone protector, it looks like this one will see the light of day. We've reached out to AT&T, Incipio and Isis and will update this post if we hear back.

In this article: att, incipio, incipiocashwrap, isis, IsisMobileWallet, mobilepostcross
All products recommended by Engadget are selected by our editorial team, independent of our parent company. Some of our stories include affiliate links. If you buy something through one of these links, we may earn an affiliate commission.