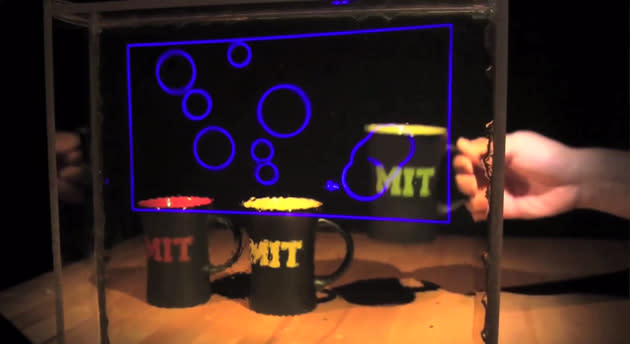 Transparent screens just aren't very practical these days -- bigger models are frequently expensive and bulky, while smaller heads-up displays tend to have very narrow viewing angles. However, MIT may have solved all those problems at once with its prototype nanoparticle display. The device creates color images on a glass surface simply by 'tuning' a silver nanoparticle coating until it lets only certain light wavelengths pass through. The technique is both cheap and compact, since it requires little more than the coating and some off-the-shelf projector technology. There's also no need for beam splitters or mirrors, so you can see the picture from just about any angle. While there's a lot of work left before there's a finished product, researchers note that their display would be as easy to implement as window tinting; don't be surprised if MIT's screen shows up on a car windshield or storefront near you.

In this article: Display, glass, heads-updisplay, hud, mit, nanoparticles, silver, transparent, transparentdisplay, video, window
All products recommended by Engadget are selected by our editorial team, independent of our parent company. Some of our stories include affiliate links. If you buy something through one of these links, we may earn an affiliate commission.