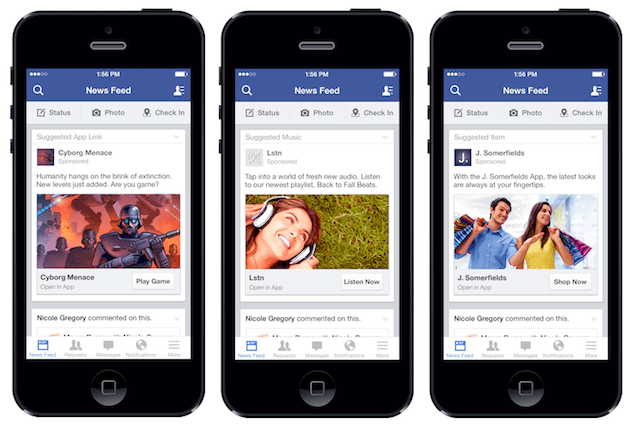 If you've ever been creeped out by those eerily targeted ads on Facebook, get ready for more of the same in other mobile apps as well. The popular social network has announced today that it's testing a new ads platform with a select few advertisers and partners that will push those ads beyond Facebook's walls. It's a lot like Google's AdSense network, except Facebook is focusing on mobile apps, and not the web. Sriram Krishnan, who works on the mobile and ads platform for Facebook, said in a blog post that "we'll be extending Facebook's rich targeting to improve the relevancy of the ads people see, provide even greater reach for Facebook advertisers, and help developers better monetize their apps." What does this mean for you? Well, it likely means that you might end up seeing those behaviorally targeted ads in pretty much any app that signs up for Facebook's ad network. And here we thought those autoplay video ads were annoying enough.

In this article: ads, advertising, facebook, mobile, mobilepostcross
All products recommended by Engadget are selected by our editorial team, independent of our parent company. Some of our stories include affiliate links. If you buy something through one of these links, we may earn an affiliate commission.