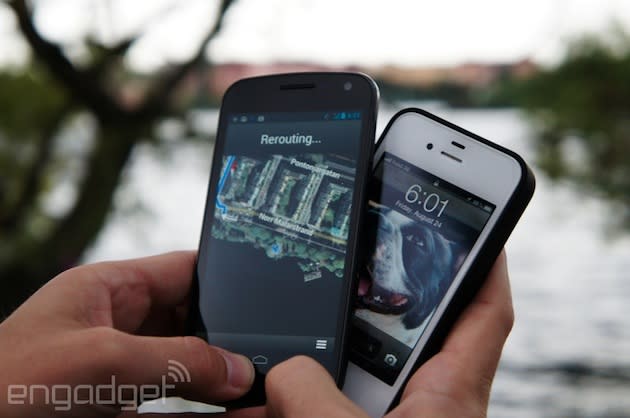 A US judge has just awarded Apple two summary pre-trial judgments, significantly reducing Samsung's chances of prevailing in the second patent clash between the two tech giants. Judge Lucy Koh invalidated a Samsung multimedia-synchronization patent and determined that the Korean company breached an Apple autocorrect IP -- meaning Koh thought the infringement was so clear that there was no need for a jury to see it. As Foss Patents pointed out, Google could also be unhappy about the autocorrect decision, since it may affect the entire Android ecosystem. With each party bringing five claims to trial, Samsung's chances have effectively dropped by 20 percent since it only has four of its own claims left and Apple has already prevailed on one. That could also impact Samsung's leverage in upcoming negotiations between the company's CEOs, since it hasn't won a single non-FRAND (standards essential) patent dispute through any of the two proceedings. If those discussions don't pan out, then the Apple v. Samsung, part deux trial will begin March 31, 2014.

In this article: apple, applevssamsung, judgement, patents, samsung, trial
All products recommended by Engadget are selected by our editorial team, independent of our parent company. Some of our stories include affiliate links. If you buy something through one of these links, we may earn an affiliate commission.