OnePlus 8 Pro will reportedly include wireless charging and waterproofing

There's a new Fitbit Charge coming, based on leaked details 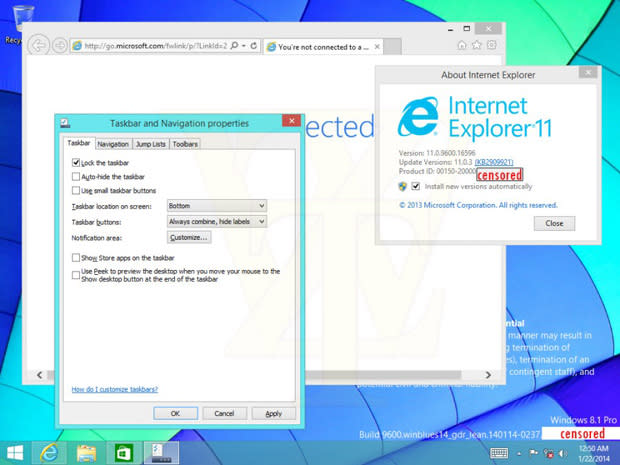 Microsoft started blurring the lines between the modern Windows interface and the classic desktop with Windows 8.1, and there are now signs that it's ready to mix things up a little more. WZor has posted screenshots of a leaked Windows 8.1 update that would let users pin Windows Store apps to the desktop's taskbar, saving them the trouble of visiting the Start screen. There aren't any hints that these apps would run on the desktop. However, it may be easier to return to the traditional Windows environment. SuperSite for Windows' Paul Thurrott hears from sources that the upgrade may also add a desktop-like close button -- you wouldn't have to remember gestures or keyboard shortcuts to quit a Store app. There aren't any clues as to when this OS update would arrive, although we wouldn't be surprised if there's some news by the time Microsoft's Build developer conference kicks off in early April.

In this article: leak, microsoft, OperatingSystem, os, software, update, windows, windows8.1, wzor
All products recommended by Engadget are selected by our editorial team, independent of our parent company. Some of our stories include affiliate links. If you buy something through one of these links, we may earn an affiliate commission.