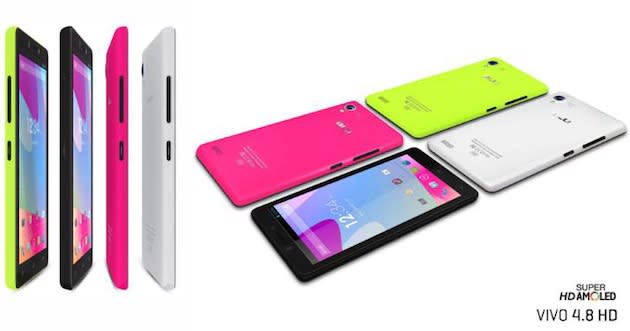 Nokia and Apple aren't the only ones making brightly colored phones, you know. Upstart Android manufacturer BLU has just released a new midrange handset, called the Vivo 4.8 HD, that's sure to appeal to those with a taste for neon and Android 4.2. It comes in neon pink or greenish yellow, along with matte black or white variants, and has a 4.8-inch, 720 x 1280 Super AMOLED display. On the inside, the Vivo 4.8 HD packs far from cutting edge tech: a 1.5Ghz quad-core chip from Mediatek, 1GB of RAM and 16GB of storage. Yet, it crams that gear -- along with an 8 megapixel rear shooter and a 5-megapixel front-facing unit -- into a svelte, pocketable 6.9mm thick chassis. Unfortunately there's no LTE inside, but you can pull HSPA+ 42 speeds from AT&T or T-Mobile. The best part, as is the case with other BLU phones, is the price: just $249 unlocked.

In this article: android4.2, blu, mobilepostcross, superamoled, vivo4.8hd
All products recommended by Engadget are selected by our editorial team, independent of our parent company. Some of our stories include affiliate links. If you buy something through one of these links, we may earn an affiliate commission.