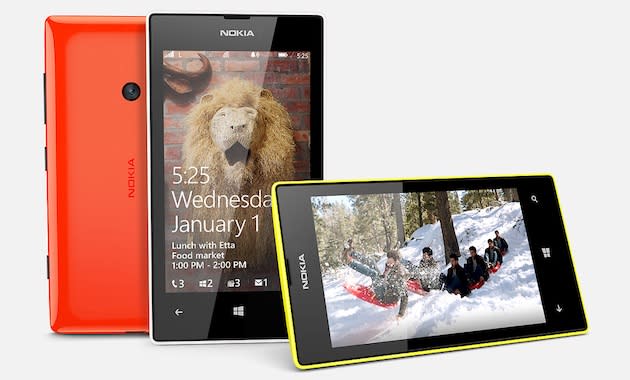 Nokia's Lumia 525 popped up in a Chinese regulatory filing earlier this month, but now we have official information about this new budget Windows Phone 8 device. In lieu of fanfare or a Middle Eastern press event, it's appeared via a YouTube video (embedded after the break) and a simple product page. Appearing as a successor to the popular Lumia 520, the 525 keeps the swappable covers (orange, yellow or white) like previous Lumia models and the polycarbonate style-jacking iPhone 5c, while doubling the amount of RAM inside to 1GB. Just like the earlier model, it has a 4-inch screen, the 5MP rear camera is still without flash, microSD storage expansion, and it's powered by a dual-core Qualcomm S4 processor. It will arrive with Nokia's usual Lumia apps, but with that extra memory it can run more of them at once.

There's no release information yet on the page yet, while the website only lists Africa, Middle East and Asia Pacific. However, Nokia has said it will not be coming to the US or the UK. Fortunately, Engadget Chinese reports the 525 and 526 have been announced for China Unicom and China Mobile, respectively, at an off-contract price of 1,099 yuan ($180 US), shipping in December. This pricing is in line with the 520, aligning this as the pay-as-you-go WP8 option it appears to be, but we'll keep an eye out for domestic carrier release info just to be sure.

In this article: lumia525, microsoft, mobilepostcross, nokia
All products recommended by Engadget are selected by our editorial team, independent of our parent company. Some of our stories include affiliate links. If you buy something through one of these links, we may earn an affiliate commission.