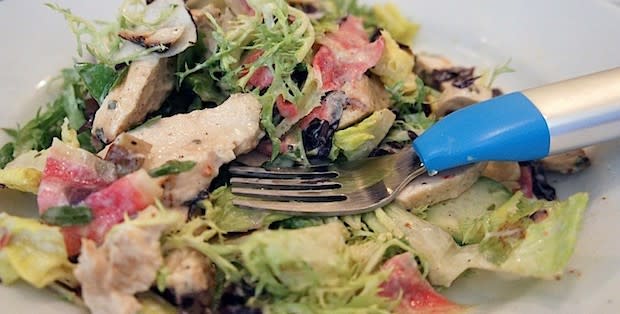 Some of today's leading wearable devices are, at their core, little more than souped-up pedometers. Their once-dim monochrome LCD screens have migrated from atoms to bits that connect to the internet, allowing them to display information in a more engaging way and track it over time. They have been a big win for output, but with essentially the same input.

Indiegogo in particular has been a fertile launchpad for alternative wearables for the fitness enthusiast. One has been the Push band, which measures things such as force, power and velocity for activities like weightlifting. And the impact of that might be measured by the Skulpt Aim, which tracks muscle health. Another alternative to run monitors in development is the Atlas, which includes a digital footprint of 30 different exercises for more intelligent exercise analysis.

But even the most sophisticated and accurate exercise monitoring provides insight into a very small picture of our overall wellness. To provide greater insight into our quantified health, far more needs to be considered.

For the common problem of obesity, changing eating habits is likely to have a bigger payoff than the daily difference of a few thousand steps. And while there are many apps that allow people to input their food manually or even take photos of it, that is almost the equivalent of having us manually count the number of steps we take in a day.

Some of the earliest efforts in this space have come from the HAPIfork. It measures the speed and frequency with which one shovels food into one's mouth, but it can't distinguish between lettuce and butter-infused mashed potatoes. Then there's TellSpec, a spectrometer that offers to analyze the nutrient and allergen content of your food. Given, that's an order taller than a stack of Big Macs, and it's been met with a large dose of skepticism.

Stress, and how one deals with it, can be a key factor in determining one's level of wellness. It's easy to detect the signs of stress such as a faster heartbeat, and many gadgets like the Basis watch can measure that. What's more difficult is determining stress itself. Perhaps some guesses could be made about factors such as noise levels, late hours and scheduling. Companies such as Helicor, with its StressEraser, and HeartMath have developed biofeedback devices to help with relaxation and stress reduction; the latter has released a version that connects to iPhones via cable.

The next Switched On will discuss some of the less volatile factors that have an impact on our health and wrap up with some thoughts on how we all might benefit if we can find a way for them to come together intelligently.

Ross Rubin is principal analyst at Reticle Research, a research and advisory firm focusing on consumer technology adoption. He shares commentary at Techspressive and on Twitter at @rossrubin.
In this article: column, hapifork, health, heartmath, indiegogo, rossrubin, stresseraser, switchedon, tellspec, wearable, wellness
All products recommended by Engadget are selected by our editorial team, independent of our parent company. Some of our stories include affiliate links. If you buy something through one of these links, we may earn an affiliate commission.