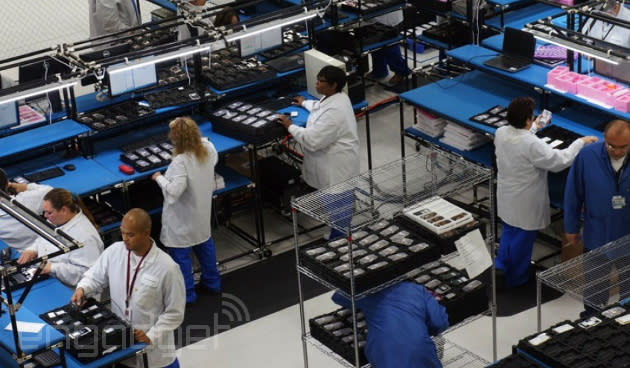 Lenovo purchasing Motorola from Google raises a lot of questions. But, lost amid all the speculation over what this means for the marketplace, is the potential human cost. Motorola directly employs over 4,000 people, many of them at its headquarters in Libertyville, Ill. -- a wealthy suburb north of Chicago rich with brick single-family homes and more trees than people. For the moment, at least, those employees and the executive team appear to be safe. During yesterday's conference call following the announcement of the deal, Lenovo officials said there were no immediate plans for layoffs or a leadership shakeup. Things are a little more uncertain for those who rely indirectly on Motorola for their paycheck, for example the people working the Moto X assembly line in Fort Worth, which is run by subcontractor Flextronics. On that very same call, when asked what the purchase meant for those workers, Lenovo danced around the question, saying only that it would do whatever was necessary to "grow the brand." It was a rather ominous statement that seemed to imply the relationship with that particular Flextronics manufacturing plant would not last. But, after the Lenovo call ended and journalists rushed to update their articles, the story continued to evolve. Flextronics held its quarterly earnings call shortly afterward and said it anticipated no immediate changes at its Fort Worth facility. In fact, the company's CEO Mike McNamara took time to brag about its "fabulous relationship" with Lenovo, which it hopes to grow on the heels of the Motorola deal. The Chinese manufacturer later issued a statement saying that "there are now no plans to change Motorola's approach to manufacturing."

That doesn't necessarily mean those jobs are safe beyond the immediate future. But there is reason to believe (hope) that Motorola phones will continue to be manufactured here in the US. As a contractor with both Motorola and Lenovo, Flextronics already has its foot in the door. And, while it has never built phones for Lenovo, its experience building highly customized flagship handsets on short order may appeal to the Chinese company as it looks to distinguish itself from other players in the market and make its mark in the Americas. In fact, that ability to customize an order and still deliver it quickly was one of the many competitive advantages Jay Parker, president of Lenovo North America, cited as an advantage of its newly opened plant in Whitsett, NC, where it employs 115 people. (This was also the reason that Google decided to build the Moto Maker editions of the Moto X in Texas.) Just down the road, Lenovo has another 2,200 employees working out of its American headquarters in Raleigh, NC, with hundreds more scattered across the country. Lenovo is particularly proud of its investment in America. The CEO, Yang Yuanqing, even took time out during the Motorola press conference to reference President Barack Obama's call to invest in America during the State of the Union. Before announcing that his company was doing exactly that. In a follow-up statement, it claimed that the purchases of Motorola and IBM's server business mean that it has invested about $6 billion in the American market since 2005.

Flextronics cannot predict the future and, while it's hopeful about extending its manufacturing partnership with Motorola, it acknowledged that everything could change in a year from now. Still, when one of the few companies building PCs in the US joins forces with the only company building smartphones in the US, it's hard not to be at least slightly optimistic about the future of high-tech manufacturing in the country.

In this article: editorial, Flextronics, google, lenovo, manufacturing, mobilepostcross, Motorola, us
All products recommended by Engadget are selected by our editorial team, independent of our parent company. Some of our stories include affiliate links. If you buy something through one of these links, we may earn an affiliate commission.