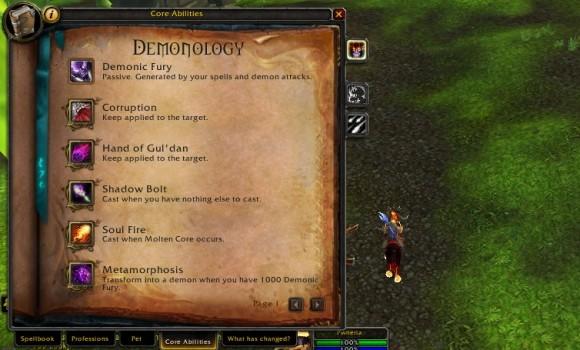 Every week, WoW Insider brings you Blood Pact for affliction, demonology, and destruction warlocks. This week, Megan O'Neill won't give it up on Soul Fire.

Celestalon started the talk about what abilities would we be sad over losing. I don't know that warlocks would lose many spells with our recent expansion overhaul -- we're pretty streamlined as it is. Veteran warlocks can see and feel the difference between Cataclysm's complication and Mists' minimalism every time they play.

A warlock class strength is that we're so flexible at dealing damage, whether we do it through DoTs or with direct damage, or whether we're single target masters or AoE beasts. So we end up with a good deal of situational abilities that confuse the casual or fresh warlock as to what should be keybound. We might not lose the amount of abilities that, say, hunters will, but we're likely not immune from the chopping block. Let's talk some suggestions.

What do warlocks have for CC?

In PvP as a warlock, you've got your 2 baseline CCs, up to 2 talented CCs, a pet CC, a guardian pet CC, and whatever your spec is great at doing for either CC or really denting your opponent's health bar. Warlock CC is meant to be mostly defensive in PvP, partially because we're clothies and partially because we tend to get the everloving nerfed out of us whenever we demonstrate amazing self-healing potential. Blood Horror once allowed Fear to be used offensively, which earned it a rework by the developers.

In PvE, CC is nearly nonexistant in PUG groups. Everybody wants to get through this boss right the fel now, thus we don't have time to be laying down or obeying CC. Even in challenge modes, AoE stuns, Solar Beam, and a couple of interrupts are all that is wanted.

Unfortunately for warlocks, this isn't The Burning Crusade anymore -- there's no plethora of demons or elementals to be controlled. Fear still needs a major glyph to not cause havoc in a tight dungeon hallway, while Carrion Swarm rightfully has a minor glyph to remove its knockback. Curse of Exhaustion is sometimes an essential part of an encounter (hello, heroic Tortos), but half the time it doesn't even apply to a mob, merely rendered "Immune" in floating combat text.

Finally, knocking out Enslave Demon, as useless as it pretty much is right now, would completely wreck the warlock green fire finale.

I don't think our CC needs to go away so much as it needs a rework. In PvP, it's fine to keep warlock CC to defensive mode; we're still good at pressuring opponents with damage, even when chilling at the graveyard. In PvE, CC needs to be refined a little to see some use outside talenting Shadowfury or using the felhunter/observer pets. For the love of Gul'dan, make the Fear glyph a minor one like c; I don't see the point of needing to swap out a glyph for trash mobs.

Eye of Kilrogg comes to mind. While the warlock green fire quest would again be in a little trouble without Eye of Kilrogg, I don't know when I use this, ever. Sometimes I use it to peer around in PvP. I would be sad to see it go because it's fun to mess around with (e.g., bouncing warlock balls during raid break), but I don't know of any damage-impacting uses.

Unending Breath is a spell that comes up as looking useless, but I use it all the time. Doing underwater adventures on the Timeless Isle requires it and it's nice when affliction and in combat to pop up my over water-walking spell rather than having to drag out my glyphed Dreadsteed or water strider mount. I wonder about the Zangarsea zone in Warlords of Draenor, whether my guild will love me for Unending Breath in the beginning of leveling like they did in bottlenecked Vashj'ir. Unending Breath is just too useful for general leveling and questing to be canned.

During the Twitter conversation about button bloat, a side-conversation branched off. A leveling warlock player said the leveling experience for warlocks was confusing and felt like too much, so she agreed that something needed to be cut from the buttons.

ut not every active ability you learn as a warlock needs a keybind. Looking at my keybinds, you can use macros to put most needed abilities within 12 keys, 20 if you want to consider my Naga. Everything else is clickable when needed.

The main problem with warlock leveling is not that there are too many buttons, but that it's sometimes confusing as fel what you're supposed to be doing. The problem is that we got reworked for endgame in MoP, but our leveling process is from back in Cataclysm. Some things are put together nicely -- by level 42, every spec has its resource and unique filler going on.

Other things border on stupidity. My example is getting Soul Fire at level 13 but not getting the Molten Core proc to pair with Soul Fire until level 69. That's 56 levels of using a 4-second cast spell in the level ranges where you see diddly amounts of haste on gear. Who would ever in their right mind use Soul Fire in that situation? Until you get well into the 30s, your minion even is going to nearly kill the mob by itself before you get one Soul Fire off.

It made sense in Cataclysm when Improved Soul Fire was a thing for all three specs in the beginning, but with Soul Fire restricted within demonology to being a proc spell, there's really no point to learn it that early. As Cynwise pointed out, we can't move Molten Core earlier in leveling because most procs are introduced in the later leveling game because of rotation complexity. He also pointed out that Molten Core has more of a purpose if you recognize the difference between normal Soul Fire's arse-long cast and the proc's magical fix of a shortened cast. So move Soul Fire up to something like 60 -- we get to play with it on mobs that can last a 4-second cast, for one, and in a few levels, we'll get the proc before we forget what spell it goes with.

Why do we need Molten Core? Rotation complexity. Molten Core is a proc -- it's a thing that happens during a rotation priority that makes you press a better-for-the-moment button. In demonology's case, it allows you to press your execute button early. Without it, demonology is just DoTs that last forever and flip-flopping between demon form and caster without ever changing up what buttons are being pressed. It's simply boring without Molten Core.

Why do we need Soul Fire and Molten Core? It's thematic. Demonology has a theme of demonic duality going on. You're a normal caster most often with spurts of demonic glory in Metamorphosis. Corruption changes into Doom, Shadow Bolt into Touch of Chaos, Hand of Gul'dan into Chaos Wave. Soul Fire, however, doesn't change; it's the spell between worlds. Soul Fire is demonology's execute spell; Shadow Bolt is the normal caster filler to mirror it. Molten Core allows Soul Fire to be briefly glimpsed outside the power-busting execute phase, much like our resource demonic fury will allow Metamorphosis's power to reign for a short time.

Why do we need Soul Fire to not be Shadow Bolt? Number balancing. In Cataclysm, Soul Fire caused problems by being destruction's filler but demonology's execute. Buffing or nerfing the spell for one purpose would also affect the other. In MoP beta, the devs split Soul Fire into two spell IDs that initially acted identically down to the tooltip -- one got named "Chaos Bolt" -- and adjusted each from there.

Soul Fire is restricted to demonology in MoP, but the potential for the problem remains -- it's still demonology's execute, not to be confused with a non-execute filler spell that hits a target way more often. Furthermore, it goes back to rotational complexity if Shadow Bolt just becomes Soul Fire under a Molten Core proc -- what's the point of a proc if you're going to continue pressing the same button anyway? Procs are there to make the player react and do something interesting.

Soul Fire (and Molten Core by proxy) is one of the interesting things that goes on in demonology, so it needs to stay.

Blood Pact is a weekly column detailing DOTs, demons and all the dastardly deeds done by warlocks. We'll coach you in the fine art of staying alive, help pick the best target for Dark Intent, and steer you through tier 13 set bonuses.
In this article: axe-toss, banish, crowd-control, demonic-breath, enslave-demon, eye-of-kilrogg, fear, featured, guide-to-locks, guide-to-warlocks, howl-of-terror, lock-guide, lock-info, lock-talents, molten-core, mortal-coil, seduction, shadowfury, soul-fire, unending-breath, warlock-guide, warlock-info, warlock-talents, wow-lock, wow-lock-info, wow-locks, wow-warlock, wow-warlock-info, wow-warlocks
All products recommended by Engadget are selected by our editorial team, independent of our parent company. Some of our stories include affiliate links. If you buy something through one of these links, we may earn an affiliate commission.