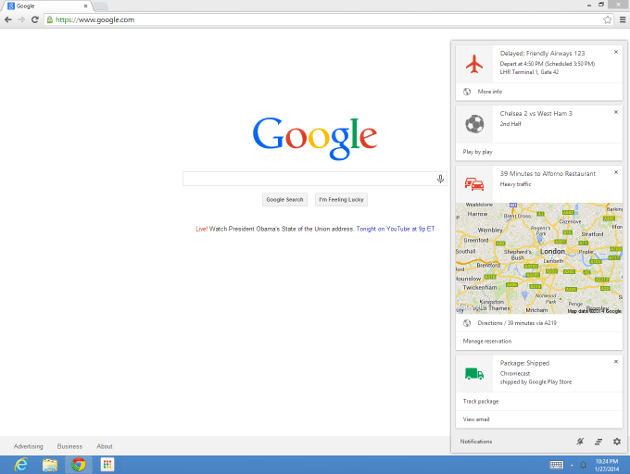 Rumblings of Google Now on the desktop first started surfacing back in December of 2012, but it wasn't until a couple of weeks ago that it actually broke cover. If you were a user of the Canary build of the Chrome browser, you could enable the card alerts by ticking an option buried deep within the recesses of chrome://flags. This week though, Google will bring the desktop version of its virtual assistant to the betas of Chrome on Windows and OS X, as well as Chrome OS. You won't need to dig through any advanced options; you'll just need to sign in with the same account you use on your handset -- so long as you have Now enabled on your phone. Unfortunately, it sounds like Linux users are left out in the cold for now. Presumably that has something to do with how Now ties into existing notification systems on those other platforms (we've asked Google to clarify). With Now hitting the beta channel, enabled by default, it's only a matter of time before Mountain View brings the feature to the masses. But if you're anything like us, you're already using the beta build and are maniacally hitting the update button hoping to be among the first customers it rolls out to.

In this article: beta, chrome, chromeos, google, googlechrome, osx, windows
All products recommended by Engadget are selected by our editorial team, independent of our parent company. Some of our stories include affiliate links. If you buy something through one of these links, we may earn an affiliate commission.