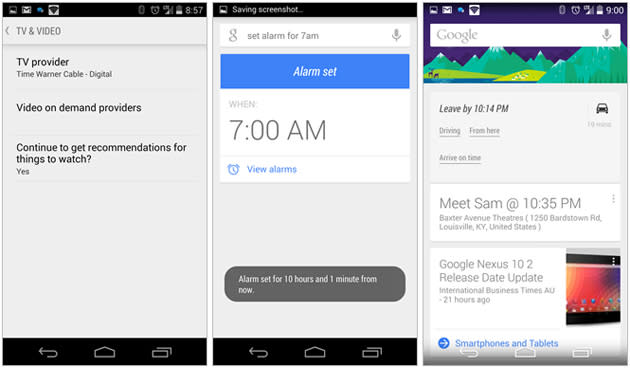 Little software updates sometimes make a big difference. Google has rolled out an update to Android's search app that's currently listed as a simple bug fix, yet introduces a deluge of new features for Google Now. You can now choose specific TV and video on demand providers for viewing recommendations, and you'll see Airbnb reservations. There also won't be many excuses for being late after this upgrade -- Android Police readers note that the app introduces both simpler alarm controls as well as helpful tools for getting to an appointment on time. Google has even seen fit to officially rename the Nexus 5's home screen interface, calling it the Google Now Launcher. The new search hasn't been pushed to everyone just yet, but we'd expect it to reach many Android users in the near future.

Update: It looks like the update is going out widely today. A Google Search post on Google+ focuses on the tweaks for arranging appointments -- cards note when you need to leave, and they can adjust for where you're leaving from and what type of transportation will be used -- while the Google Play changelog fills in the rest of the details.

In this article: airbnb, android, google, googlenow, googlenowlauncher, googlesearch, mobilepostcross, search, smartphone
All products recommended by Engadget are selected by our editorial team, independent of our parent company. Some of our stories include affiliate links. If you buy something through one of these links, we may earn an affiliate commission.