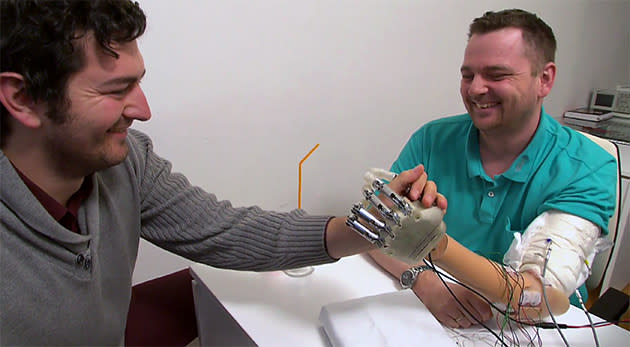 Nothing can quite undo the trauma of losing a limb, but a team of EU researchers has been trying to help by bringing sense to senseless prostheses. They're doing pretty well at it too: they recently spent a full month giving one lucky test subject some of his sense of touch back. A series of electrodes were implanted into the two main nerve bundles in test subject Dennis Sørensen's left upper arm, where they were left for 31 days. Sørensen was then fitted with a special sensor-laden prosthetic hand, and algorithms chewed on the data from those sensors to determine just how to stimulate those nerves.

Before Sørensen knew it, bzzzt! That sensory data was converted into nerve impulses so Sørensen could "feel" those objects in real-time. Not only he could discern the different shapes of objects he picked up, he could get a sense of what they were made of too. Unsurprisingly, Sørensen -- who lost his left hand in a fireworks accident nine years ago -- is itching to use one full time. We're still a long way off from portable models that don't require support from a lab, but there's plenty of interest (not to mention progress) in crafting a new generation of sensitive prosthetics.