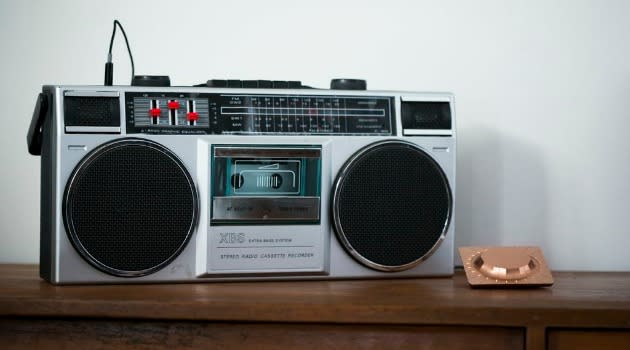 If you want to make your favorite speakers wireless, you have a few options. Nothing on the market, however, is quite like Beep. Launching today, the tiny dial works like a Chromecast for your speakers, and lets you cast tunes from your mobile device over Wi-Fi -- and with none of the range restrictions that affect Bluetooth-based devices. The creation of two ex-Android engineers, the project has financial backing from big names like David Dolby and Alexis Ohanian.

Beep can be connected to any speaker in your home that has a 3.5mm or optical input. Wi-Fi setup is done in a few minutes using an accompanying mobile app, and once connected you're able to pump out the jams in any room of your home directly from your Android or iOS device. Each speaker or amp you want wireless will need its own Beep, and for the time being speakers can't be paired together to create stereo setups like you can with Sonos. You can name each setup by location with things like 'Bedroom' or 'Kitchen' to keep them straight, and everyone on your wireless network is free to connect and rock out.

We had the opportunity to play around with a prototype of Beep this week in San Francisco, read on for our first impressions of the device after the break. While it appears to be made metal, the prototype we tried out has a body and dial made of plastic that feels a bit of the cheap side. Beep co-founder Daniel Conrad tells us more metal parts will be added in the final product however, to make it heavier and add an old school audio-dial feel.

One standout feature of Beep is the lights on the front of the device. While in use, the lights around the dial blink in a starry fashion. Tapping the center of the dial will start or stop your tunes. When you tap to adjust what's playing, the lights burn constant and indicate volume, which is controlled by turning the dial. It's a beautiful-looking display, and something you'll want to show off rather than hide in the back of your entertainment center.

In a nutshell, playing music is as easy as it looks. Beep works by selecting the cast button within an app and picking your speaker of choice. A URL is then tossed to Beep with audio caching and decoding handled inside the dial. Much like Chromecast, with Beep you're limited in what you can play by the apps the device supports. For now, that means you can only use Pandora's mobile app, but Conrad says they're already in talks with a number of other major players in the space, with plans to support them all. Unlike Chromecast, Beep will also let you play music stored on your phone. At launch, the app will support MP3 and AAC files, with plans to add more based on user feedback.

You can get your hands on Beep this fall for $149. If you're ready to buy now, the company is offering preorders for $99, with a $10 discount for every friend you convince through Facebook or Twitter to buy as well. Ultimately the company hopes to also license its Wi-Fi technology to speaker companies to build into units, so in the future you might buy a set of speakers with "Beep inside" out of the box.

In this article: audio, Beep, hands-on, speakers
All products recommended by Engadget are selected by our editorial team, independent of our parent company. Some of our stories include affiliate links. If you buy something through one of these links, we may earn an affiliate commission.