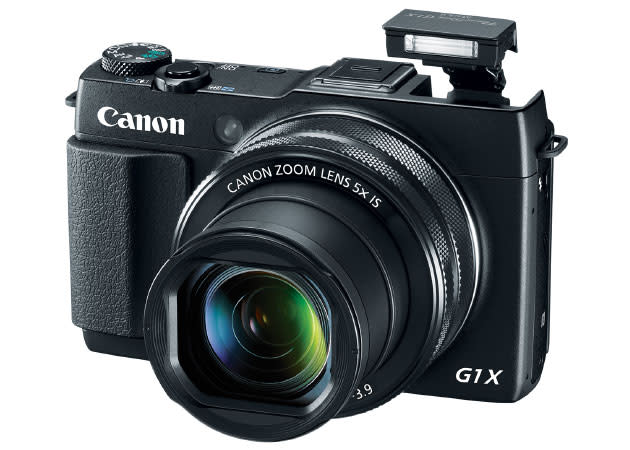 Canon introduced its PowerShot G1 X at 2012's CES, and two years later, the pricey high-end point-and-shoot is ready for an update. This year's iteration, the G1 X Mark II, includes a 12.8-megapixel CMOS sensor, and like its predecessor, this new chip measures 1.5 inches diagonally, enabling some pretty spectacular images. There's a 24-120mm f/2-3.9 zoom lens, so you can expect shallow depth of field throughout the maximum-aperture range, and sharp shots even in low light. It includes a 1.04M-dot 3-inch tilting touchscreen, a DIGIC 6 processor, 12,800 top ISO and 1080/60p 1080/30p MP4 video capture. Additionally, you can pair the Mark II with Canon's companion apps via WiFi and NFC for remote shooting and wireless image transfers. There will also be an XGA electronic viewfinder accessory that mounts on the hot shoe, should you prefer an EVF. Pricing for that add-on is TBA, but expect the G1 X Mark II to hit stores in April for $800. In this article: camera, cameras, canon, cpplus, cpplus2014, g1x, g1xmarkii, g1xmkii, powershot
All products recommended by Engadget are selected by our editorial team, independent of our parent company. Some of our stories include affiliate links. If you buy something through one of these links, we may earn an affiliate commission.