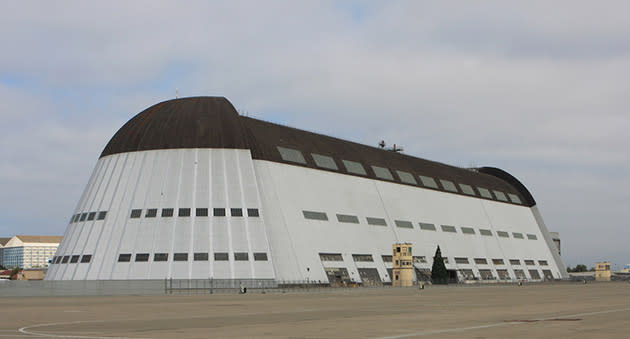 You might get zero hits now when you search for pics of a giant fleet of Google zeppelins, but that could change in the not-too-distant future. Planetary Ventures, one of the company's subsidiaries, just got into an agreement to take over a humongous NASA hangar (named Hangar One) in Mountain View that's big enough to house a slew of dirigibles. To be exact, Google will lease Hangar One and its surrounding land, including its associated airfield, from NASA -- that is, if the two can agree on the lease's terms. Considering Google's rolling in dough, however, price will likely not be an issue.

If the deal goes through, Planetary Ventures will re-skin Hangar One (it was stripped down to its metal framework years ago), build an educational facility and upgrade an existing golf course in the area. It will also handle the airfield's operations, so NASA can slash off its maintenance costs and earn from the lease at the same time. It's unclear what exactly Google plans to do to more than eight acres of space, but we're guessing it's big enough to house its many projects, its execs' numerous jets and even all its internet balloons.

In this article: ames research center, google, HangarOne, mountain view, NASA, planetaryventures
All products recommended by Engadget are selected by our editorial team, independent of our parent company. Some of our stories include affiliate links. If you buy something through one of these links, we may earn an affiliate commission.