Sony's A6000 is the mirrorless camera you'll want to own, ships this April for $800 with lens 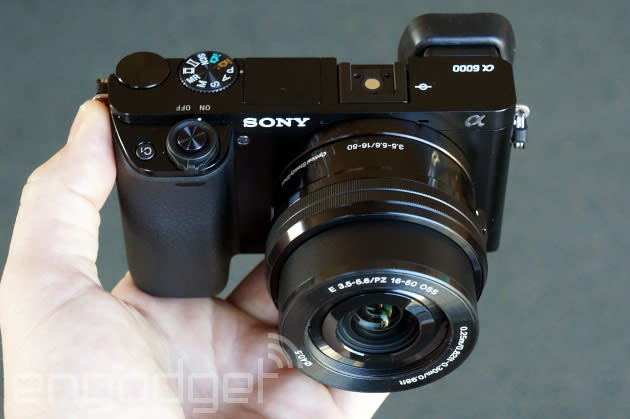 Well, Sony's really done it this time -- your still-crisp NEX-6 may now be marked for an early retirement. The A6000 is here to replace one of 2012's most exceptional shooters, and despite the NEX-6's success, this fresh 2014 model is the one to own. There's a brand-new 24.3-megapixel CMOS APS-C sensor paired with a BIONZ X processor at the core, enabling what Sony's calling the "world's fastest autofocus." We're talking lag of just 0.06 second, thanks to the 179 phase-detect and 25 contrast-detect AF points. You also get 11 fps continuous shooting with tracking AF. Those focusing improvements are most notable in our book, but the price drop is surely worth a mention, too. The A6000 will ship for $800 with a 16-50mm power-zoom kit lens, compared to the $1,000 Sony was commanding for the NEX-6 back in 2012.

Like other recent Alpha CSCs, the A6000 includes an OLED viewfinder with 100 percent frame coverage and a tilting 3-inch 921k-dot LCD. You have two interface options here: the love-or-hate-it six-tile NEX menu that dates back to 2010 with the NEX-3 and NEX-5, or the recently refreshed tab-style Alpha UI, which we prefer. There's a pop-up flash, a Multi Interface Shoe, 1080/60p and 24p video capture with clean HDMI output, seven customizable buttons and 4K still image output to a compatible TV. Like its predecessor, the A6000 also includes WiFi and NFC, so you can shoot via the Android or iOS app, or transfer images from the camera to a smartphone or tablet. You also get a handful of apps on the camera itself, ranging from the free Direct Upload (for sharing images online) and Photo Retouch applications, to a few that you'll need to purchase, such as Time-lapse and Lens Compensation (for minimizing lens distortion).

We had a few minutes to check out the A6000 ahead of CP+. We poked around the new interface, which we found to be a refreshing change from the NEX format of yesteryear. The A6000 is actually noticeably larger than the NEX-6, but not significantly so. The design aesthetic is similar, though the newer model has a slightly more premium look and feel than its predecessor. There are separate dials for shooting mode and settings adjustments, compared to the two-in-one control on the NEX, but the button layout is quite similar otherwise, and if you're familiar with previous NEX cameras, you should feel at home here. You can try one out for yourself at retailers this April, or peruse our hands-on shots in the gallery below. Update: As reader AlbinRoussel points out in the comments, ItsDanKReviews managed to take an A6000 for a spin in a variety of shooting environments. He tested the continuous-shooting mode and tracking AF, both of which appear to perform as advertised. We've embedded his demo video just below.

In this article: a6000, alpha, camera, cameras, cpplus, cpplus2014, hands-on, mirrorless, nex, sony, Sony a6000
All products recommended by Engadget are selected by our editorial team, independent of our parent company. Some of our stories include affiliate links. If you buy something through one of these links, we may earn an affiliate commission.