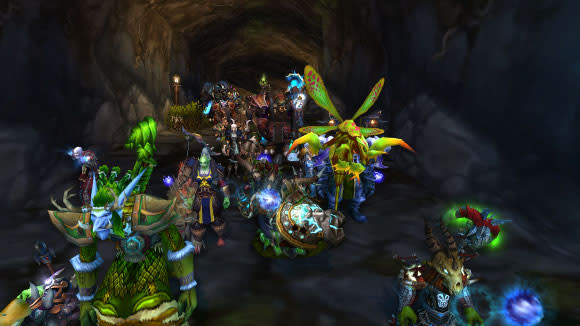 With the end of season 14 announced, and the imminent arrival of Patch 5.4.7, I thought I would take some time and get involved in some PVP action. I've always had a fondness for PVP, but raiding always took so much of my time in game, that between out of game things and raiding I just didn't have the time to invest into any amount of PVP. That's changed with a new guild, a new raiding schedule and a new work schedule out of game, so when a friend of mine asked if I wanted to start PVPing again, well I jumped at the chance.

While I'm not nearly as well versed in PVP as my fellow shaman of awesomeness Oliva Grace, I still manage to have a lot of fun in both Arenas and Battle Grounds. That said, I've been away from the PVP scene for a while, not setting foot in an arena since the middle of Cataclysm. I thought I would share my experiences and thoughts from this past week.

Some Things Remain the Same

My foray back into the world of PVP this time around has the distinct difference than any other time in the last several years because it is the first time since Classic WOW that I'm doing any form of PVP as Horde. This is a bit of an exciting novelty for me when entering Battle Grounds as I'm seeing things like Alterac Valley and Warsong Gulch from the red side for the first time in a very long while. That said, at least with Battle Grounds, is that there is a ton of things that are still the same. One thing that I noticed, is that AV still seems like an uphill battle for the Horde. Back when I was Alliance, it seemed like we would always just steam roll to the end, or get the horde at a choke point and just wear them down or push for a win. I always thought that this was mostly because of bad tactics or what have you. Now though, I'm not so sure I was right all that long ago. I think I've been on the winning side of AV once out of the last dozen times I've gotten it as my random BG. Even the most organized of the groups has had a very hard time. It just seems that the Alliance gets to the keep well before the horde even gets the chance to. Even with that, I still love it. I still miss the days of the epic battles where all objectives and quests were completed in AV by both sides in an attempt to win. Maybe one day we'll get back to that

Warsong still feels pretty much the same, as does Arathi Basin. Now, the new battle grounds for Mists I'm really taking a look at with any real investment for the first time. While I did venture in to them to complete my legendary quest, I didn't really pay too much attention to them at first. The Temple of Kotmogu, Deepwind Gorge and Silvershard Mines are all very entertaining. Well, Temple and SIlvershard for sure, I haven't done the gorge quite yet. I really like the Temple, and it's probably my favorite BG as of late. I really like the Orb of Power mechanic, especially from a healer perspective when the player holding the orb is taking more damage, and receiving less healing. The fact that this mechanic scales throughout the match the longer the player holds the orb is fantastic. As a restoration shaman, I really like seeing how it balances against what we can do healing wise and using spells like Spirit Link Totem. Earthgrab Totem is incredibly important when attempting to pocket away the orb carriers. Offensively using Hex and Purges to help bring down attackers, it's just a awesomely hectic and adrenaline pumping time. You really have to use everything at your disposal to secure victory. It's definitely up there for the most fun I've had in a battle ground in a very long time.

Arenas, not just for the movies

I also started doing 2v2 arena matches with a good friend of mine, a restoration shaman and fury warrior, and the first night was just a wild ride. We ended the night 30 wins and 5 losses, and with me wearing almost no PVP gear at the time. It was interesting for me because there was a lot of things that were slightly changed, like additional ramps placed in the Blades Edge Arena (thankfully). But, that said, it was like putting on a familiar and comfortable sweater to stay warm in the winter. I always loved arenas, and in Burning Crusade and Wrath I spent a lot of time in them with friends. They give you a great chance to use all of your abilities, including your offensive ones, which as a restoration shaman is something you tend to need to be comfortable with from a PVE standpoint as well.

There's that old saying that "The more things change, the more they stay the same", well I can say that without a doubt there are some things that will never change when it comes to arenas. First among them is that I still can't stand the Dalaran Arena. I have never been able to pinpoint it, but I just can't stand that arena. There's something about it that really infuriates me. On the other side of the coin though, I finally got to see the two new arenas for Mists, The Tiger's Peak and Tol'viron Arena. I really like these ones quite a bit, though Tiger's Peak probably is the one I get the most enjoyment out of. It has line of sight blocks, and small platforms, and a ton of little details that make it fun. Tol'viron is nice, but it reminds me a lot of the Nagrand Arena, just with one less pillar.

Throughout all my adventures this week in PVP, I reaffirmed the fact that restoration shaman are just really strong, and really annoying, as far as healers go in PVP. Nature's Guardian, Capacitor Totem, Grounding Totem as well as the glyph choices available to us to modify our talents and spells combined with the CC, spell interrupts and just raw healing power we can push out we're just so strong. We have such a versatile tool kit, are highly survivable, and can keep our partners alive through a lot of damage. I can see why people say they hate facing us. Man, what a blast I've been having this past week. Something that I'm going to keep up on this time, and I'll be starting season 15 without waiting when it starts, that's for sure. How about you? Have you spent any time PVP healing? What's your favorite arena or battleground?

Totem Talk: Restoration lends you advice on healing groups, DK tanks and heroics and mana concerns in today's endgame -- or take a break and look back at the rise of the resto shaman. Happy healing, and may your mana be plentiful!
In this article: arena, battle grounds, featured, guide-to-shamans, pvp, resto, Resto-Shaman, restoration, restoration-shaman, restoration-shaman-column, restoration-shaman-totem-talk, shaman-guide, shaman-healing, shaman-info, shaman-restoration-column, shaman-talents, wow-shaman, wow-shaman-info
All products recommended by Engadget are selected by our editorial team, independent of our parent company. Some of our stories include affiliate links. If you buy something through one of these links, we may earn an affiliate commission.