Two-thirds of Americans now have smartphones 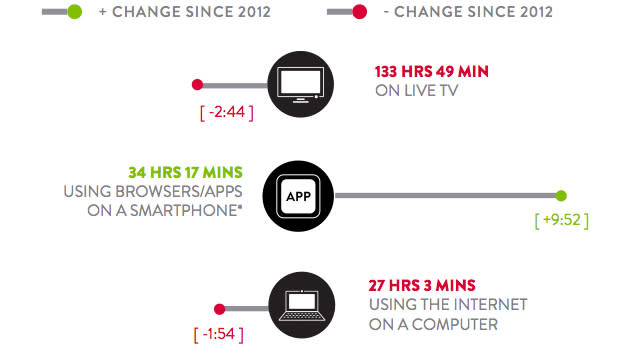 The US has officially become a smartphone nation -- at least, if you ask Nielsen. The research group's latest Digital Consumer Report estimates that 65 percent of all Americans owned one of the devices in 2013. That's a big step up from 44 percent in 2011, and smartphones are now more common than game consoles (46 percent) and digital cable (54 percent). Americans are also increasingly tech-laden, with an average of four devices per person; 29 percent of them have a tablet versus just 5 percent two years ago.

That shift toward mobile is affecting how many spend their free time. Americans spent an average of 34 hours per month using mobile apps and browsers in 2013; that's more time than they spent online with their PCs, which chewed up 27 hours. Social networking use is declining on the desktop, too, while it's surging in mobile. Smartphones aren't as ubiquitous as TVs at this stage, but they've clearly taken hold of the public consciousness.

In this article: digitalconsumerreport, hdpostcross, mobilepostcross, nielsen, smartphone, socialnetworking, tablet
All products recommended by Engadget are selected by our editorial team, independent of our parent company. Some of our stories include affiliate links. If you buy something through one of these links, we may earn an affiliate commission.