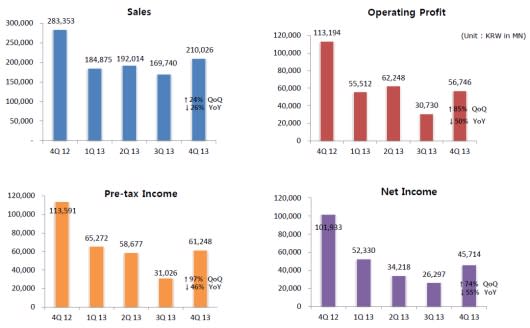 NCsoft is thanking its lucky Blade & Soul these days, as revenues from the game's popularity in China have helped to boost its financial status.

In the recently released Q4 2013 earnings report, NCsoft announced that sales, operating profit, pre-tax income, and net income were up over Q3 2013. Overall, 2013 was profitable for the company as its income went up year-over-year. NCsoft credited a growing Lineage and a "strong" and "solid" Guild Wars 2 for this effort, as well as cost savings initiatives. While sales in Korea improved from 2012 to 2013, those in Japan, Europe, and North America all declined over the same time period.

Lineage is by far NCsoft's biggest earner, followed by Guild Wars 2, Aion, and Blade & Soul. The company said that WildStar is on track to launch in mid-2014 and that the key GW2 focus is not on an expansion but with bringing the game to China.

Meanwhile, NCsoft's biggest investor, Nexon, just named Owen Mahoney as its new president and CEO, replacing Seungwoo Choi. Nexon also announced a revenue and income increase in 2013 and acknowledged that it is underperforming in Japan and the West.
In this article: aion, ascension, blade-and-soul, earnings-report, f2p, fantasy, free-to-play, guild-wars-2, gw2, lineage, lineage-2, lineage-ii, ncsoft, nexon, Owen-Mahoney, Seungwoo-Choi, truly-free, wildstar
All products recommended by Engadget are selected by our editorial team, independent of our parent company. Some of our stories include affiliate links. If you buy something through one of these links, we may earn an affiliate commission.