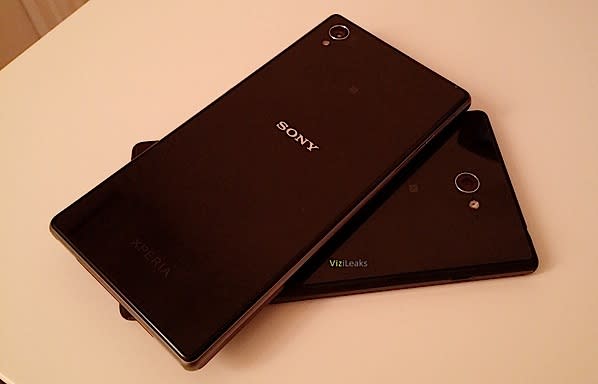 Sony's not really been his bag before, but ViziLeaks appears to have gotten hands on with one of the company's phones before its official debut at Mobile World Congress. Two photos are claimed to show portions of the Xperia G, and were tweeted out along with some nebulous specs: LTE, 8GB of storage, an 8-megapixel camera and a gig of RAM, plus a 4.8-inch screen.

Those internals, if accurate (we've asked for screenshots to confirm them) would position the G as a mid-range handset with a slightly smaller size and similar design as the Xperia Z1S laying on top of it. Unfortunately, the pictures themselves are less than helpful in telling us much else about the device, though astute readers will note the different camera and power button placement between the sibling handsets. For those who aren't familiar with ViziLeaks' work, it was proven prophetic in the summer of 2013 on multiple occasions. Those leaks, of course, were all about Nokia's Lumia 1020, but with MWC 2014 set to start in a week, we'll know soon enough if Vizileaks is just as prescient about the Xperia G.

In this article: mobilepostcross, mwc2014, sony, xperia, XperiaG, z1s
All products recommended by Engadget are selected by our editorial team, independent of our parent company. Some of our stories include affiliate links. If you buy something through one of these links, we may earn an affiliate commission.