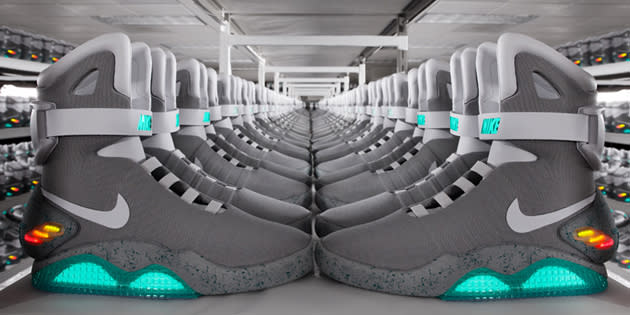 Back in 2011, Nike MAGs brought the futuristic looks of Marty McFly to the feet of sneaker collectors. There was just one problem: the fashionably-lit footwear from Back to the Future II was lacking its key feature. Well, now it seems that the iconic Power Laces will finally arrive in 2015. Nike designer Tinker Hatfield confirmed that the closure is on the way next year at a recent appearance at the Jordan Brand's Flight Lab. "Are we gonna see Power Laces in 2015? To that, I say yes!," Hatfield said. In case you've forgotten, the pair of MAGs in the movie were all the rage in 2015, so the schedule lines up. As the folks over at Sole Collector note, the question remains whether we'll see a new Power Lace-equipped version of the MAGs or if the add-on will arrive on a completely new model that laces itself. If you're not into waiting or high-tech sneakers, the 2011 release is currently available on eBay for around $8,000.

In this article: backtothefuture, mag, martymcfly, nike, nikemag, powerlaces
All products recommended by Engadget are selected by our editorial team, independent of our parent company. Some of our stories include affiliate links. If you buy something through one of these links, we may earn an affiliate commission.