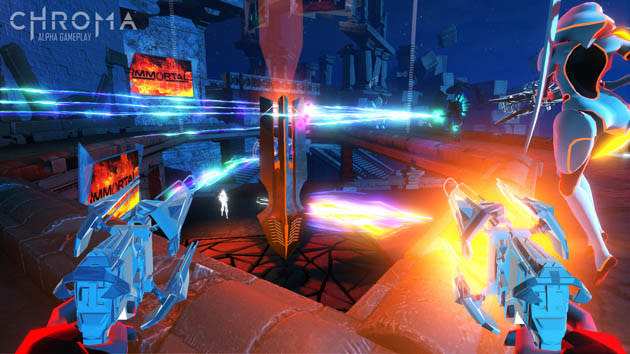 Harmonix is charting new territory yet again. The studio that birthed both Guitar Hero and Rock Band, and the only third-party game-development house that created a successful Kinect franchise (Dance Central), announced a new game today: Chroma. Unlike the studio's last several games, Chroma is headed exclusively to the PC (via Steam) as a free-to-play title. Also unlike Harmonix's last several games, Chroma is wildly experimental, blending first-person shooting with pulsing electronic beats and garish visuals. The music game studio is even working with an outside team, Hidden Path Entertainment: the same folks behind critically acclaimed shooter Counter-Strike: Global Offensive.

If you're still wondering what type of game Chroma is at this point, that's understandable: There's no such thing as a music-based first-person shooter. That is not a thing that exists (well, unless you wanna count Midway's terribly amazing Revolution X). So let's break it down: In Chroma, you play one of five classes (standard FPS fare, from basic assault to heavy "tank"), with weapons and abilities varying based on the class you choose. In the two game modes we played at DICE 2014, we were on a team with other writers battling for control of various points within a level or battling for control of a cart being pushed one way or another (think: Team Fortress 2). Pretty normal shooter stuff so far, right?

The musical wrinkle comes into play whenever you shoot or jump. Fire a sniper rifle shot on the downbeat and connect? That's a one-hit kill. Jump on the downbeat? You'll go a little higher. Better yet, jump on a downbeat on a jump pad and chain your button presses to the beat to continuously jump from pad to pad (this all makes more sense in Chroma's stylized future-world setting, promise). You can fire most guns whenever you want, and jump at any time, but timing actions to the beat makes a world of difference. That is Chroma's bizarre, fascinating premise.

Though we're sold on Chroma's ambition, playing it -- at least right now in Alpha form -- is a mess. Not just because it's early, but also because there's a tremendously steep learning curve. Playing as any of the more advanced classes (engineer, tank) is nigh impossible, as even basic shooting is governed by matching trigger pulls to the beat (we played with an Xbox 360 gamepad, but a mouse/keyboard combo works as well). A visual indicator on-screen helps the rhythmically handicapped with upcoming beats, but even veteran beat masters will have a hard time juggling character control, map navigation, aiming and shooting while at the same time trying to match shots to the beat (not to mention lining up the timing of hitting an enemy with the rhythm of the in-game music).

Beyond being an incredibly risky blend of two totally different game genres, Chroma will live and die by providing a lag-free experience. The game's dependence on rhythm while also being an online-only shooter means that any lag results in an extremely off-balance game. And all it takes for players to walk away from a free-to-play game is, well, anything. It's free, right? As a veteran of FPS games and a longtime Guitar Hero/Rock Band/Dance Central player, Chroma simply threw too much at me at once. It's hard enough to learn a new level, parse a game type and master basic shooting mechanics without having to also figure out how rhythm fits into that. Frankly put, rhythm is too complex an input to add to a genre (FPS), which is already packed full of inputs. At least that's how it felt after playing a few rounds of Chroma last week. For what it's worth, the reps from Harmonix were all keenly aware of the barrier to entry and assured us that a rigorous training program is being created.

Thankfully for Harmonix, enough good will was built up by past work to give us pause before outright writing this off. We'll give Chroma another shot when it becomes available in closed Alpha this month (sign up right here). Harmonix isn't giving its new game a hard release date just yet, but says to expect wide availability by "this fall."

In this article: chroma, dice, dice2014, hands-on, harmonix, hdpostcross, pc, steam
All products recommended by Engadget are selected by our editorial team, independent of our parent company. Some of our stories include affiliate links. If you buy something through one of these links, we may earn an affiliate commission.