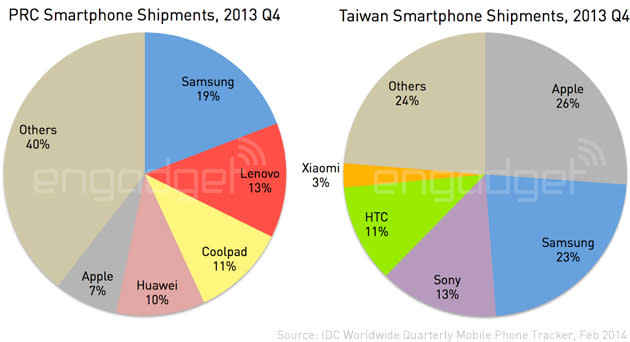 According to the latest IDC figures provided to Engadget, Samsung continued to perform well in Greater China -- as in mainland China and Taiwan combined -- in terms of smartphone shipments. In mainland China last quarter, the Korean giant topped the chart with a 19 percent market share, followed by Lenovo at 13 percent and Coolpad at 11 percent. IDC's Senior Research Manager Melissa Chau pointed out that compared to a year ago, the top three vendors remained in the same positions, but ZTE has since slipped from fourth place to out of top five, thus letting Huawei and Apple move up one place. Chau added that Apple's shipment was also boosted by the full rollout of the iPhone 5s and 5c to its other channels in China since late Q3.

While Xiaomi is nowhere to be seen in mainland China's top five, it's managed to nab 3 percent of the Taiwanese market to secure fifth place last quarter. This is no doubt thanks to the recent launch of the Redmi, aka Hongmi, budget phone there, with help from local carrier Far EasTone. But Chau cautioned that it's still early days for Xiaomi, for it "just barely edged out LG" in Taiwan, plus it's a long way behind HTC in fourth place. What's more worrying is that Acer isn't even in the top six in its hometown, which is just one of the many signs showing how it desperately needed the restructuring.

With the full rollout of TD-LTE plus Lenovo bringing Motorola back into mainland China, it'll be interesting to see how the landscape changes again a year from now.

Update: The Taiwan pie chart has been updated to rectify an error in the "Others" segment.

In this article: acer, apple, china, coolpad, htc, huawei, idc, lenovo, lg, MelissaChau, mobilepostcross, samsung, shipment, smartphone, sony, taiwan, xiaomi, zte
All products recommended by Engadget are selected by our editorial team, independent of our parent company. Some of our stories include affiliate links. If you buy something through one of these links, we may earn an affiliate commission.