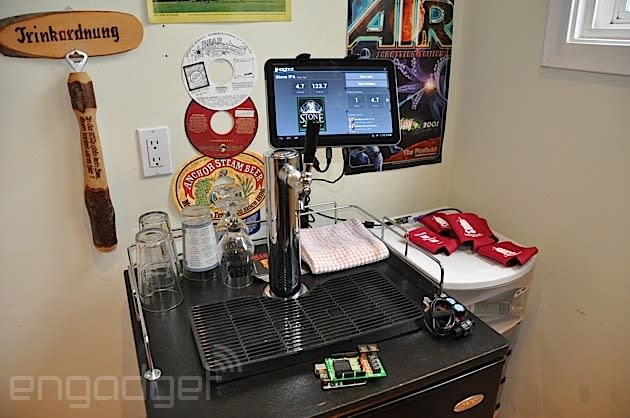 The idea of a connected kegerator isn't anything new. We've seen quite a few startups build high-tech kegs -- even Google has gotten in on the action. Those projects, however, require quite a bit of technical know-how. Now there's an easier solution for the beer enthusiasts: Kegbot. Kegbot is a bit different simply because it handles most of the geeky stuff for you. To get the device up and running, you just have to connect a flow sensor to your keg's line, and connect the pre-made board to your favorite Android tablet. With a minimal amount of effort, the device can track how much beer is left in your keg, who's drinking it and what days of the week you're consuming the most booze.

Creators Mike Wakerly and Eric Webb have been at the smart keg game for a while. The two originally sold Kegbot as a do-it-yourself open-source project. They realized there was a market for a little easier option, and developed the plug-and-play version they're currently raising money for on Kickstarter. We recently met up with the team to see the device in action. The Kegbot we saw was hooked up to a run-of-the-mill single-tap Haier kegerator, and used a Motorola Xoom tablet for its interface. Wakerly says you could create the system using any cheap, knockoff Android tablet as long as it supports USB-host mode, or any kegerator (including one you've put together yourself).

Once you've gotten everything connected, everyone drinking from your keg will need their own Kegbot account. Creating an account is a simple process that involves typing in an email address and selecting a password, as well as taking a keg-side mug shot. Before each pour, you tap "Beer Me" on the tablet's home screen and then select that undoubtedly sexy photo to identify yourself. The tablet can even take an action shot as your face lights up in the presence of fermented barley and hops, while ticking off the exact number of alcoholic ounces filling your mug (or chalice). You can also set the keg up to tweet as drinks are poured, or even check in brews to Untappd.

Drinks are grouped into sessions, so you can see how much you and the guys really consumed while watching the game, or how many sessions it takes to kill a keg. Brews are also broken down by person, so you can prove (in pie-graph form, no less) Brad had only half as much to drink as everyone else when he decided to profess his undying love to your neighbor.

Since you can't always be there, Kegbot notifies you via email when a new keg is tapped, when your friends have started drinking or when the unthinkable is about to happen -- i.e., when you might run out of beer. A limiter on the flow sensor allows you to prevent friends from drinking too much or coworkers from kicking one back on the clock. Optional NFC support can let you pass out access cards so drinkers can swipe to start pouring. If you're really hardcore, you can even put QR codes on the bottoms of pint glasses, and have a scanner on the keg's drip tray confirm each drinker's identity when they put their glass under the tap. The project is open source, which means tech-savvy drinkers can program Kegbot to do almost anything.

You can pre-order your own Kegbot now through Kickstarter -- $50 will get you just a kegboard, while $150 gets you all the necessary sensors and connectors as well. Cough up $400 and you'll even get a Nexus 7 preloaded with the Kegbot app. The boards are actually ready to go and should ship to backers shortly after fundraising ends next week -- just in time for that first spring BBQ.
In this article: Android, Arduino, beer, bevbot, Eric Webb, keg, kegbot, kegerator, Mike Wakerly, team kegbot
All products recommended by Engadget are selected by our editorial team, independent of our parent company. Some of our stories include affiliate links. If you buy something through one of these links, we may earn an affiliate commission.