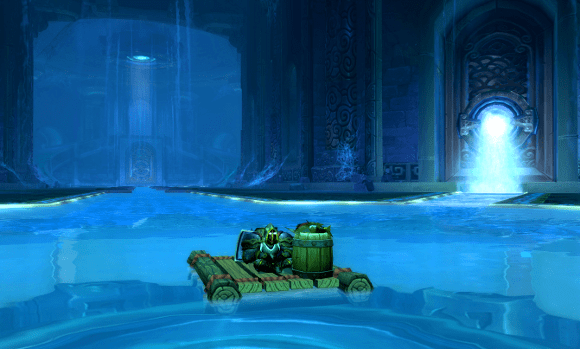 With the introduction of level 90 boosts on the horizon, many players are going to be trying new characters, classes, and specs they may have never tried before. I expect this means that many folks are going to give protection paladins a go for the first time, which is a very exciting prospect, because the spec makes for a very fun tank playstyle.

In order to help those new folks hit the ground running, I'm kicking off a two-part "quick start guide" that'll break down the spec in the 101-iest way possible, to give those new tankadins a barebones foundation that they can use to jump right into getting their faces pounded in. For today's post I'm going to talk about why one should choose to spend $60 or their free Warlords-given boost on a protection-specced paladin, and what they need to know to safely jump into that first dungeon.

You like the holy warrior/knight archetype. There's going to be a lot of sparkling and flashing as you hurl various holy, divine, or sanctified abilities at your foes. Abilities like Lay on Hands capture a flicker of that old D&D-like feeling that the paladin class was founded on, though it sadly moved away from that ideal in the last few years.

You want to have strong self-heals. Eternal Flame is a very powerful heal-over-time (HoT), though that can have some weird effects. Regardless, paladin tanks have a small degree of self-sufficiency which is awesome.

You like offering lots of group utility. Our array of Hands spells can put bubbles on our groupmates, rescue them from high aggro, reduce their incoming damage, and remove any debuffs currently snaring their movement. Not to mention we have a powerful raid cooldown in Devotion Aura, as well as two key raid buffs in our Blessings of Kings and Might.

You like a fast-paced playstyle. Thanks to Sanctity of Battle, our global cooldown is reduced by haste, which means that at a sufficiently high level of haste we can fire off abilities close to every second, compared to the usual 1.5 second GCD. This leads to a very frenetic style of combat that is unique to the other tanking specs.

For beginning tanks, this is probably the best talent loadout. To break it down:

For glyphs, a good default set is Glyph of the Alabaster Shield (our best DPS glyph that doesn't hamper our AoE), Glyph of Blinding Light (because having an AoE stun is really handy), and Glyph of Divine Protection (to make DP affect physical damage). On heavy magic damage fights, swap out the DP glyph for something else. I'll go into glyphs more in-depth in part two.

Our best stat for survivability is stamina, and generally you'll want to evaluate pieces through the lens of which gives you more stamina -- which means higher iLevel pieces will win in most cases. For both DPS and survivability, it's important to go for 7.5% hit (the hit cap) and 15% expertise (the hard expertise cap) which prevents your attacks (especially your holy power builders) from being avoided, and thus denying you holy power.

After capping hit and expertise, you'll want to just flood the zone with haste in your gems, reforges, and enchants. If you're boosting a protection paladin this late in the expansion, it's likely not to run heroic raids, so stamina everywhere isn't as critical as for you as it would be at higher difficulty levels. For random dungeons and LFR, haste is the ideal choice and will serve you well. If you want to go for socket bonuses, that's fine, but you'll only get reasonable mileage out of stamina and haste bonuses.

Don't bother with avoidance stats at all: avoid pieces that bear them where possible, don't socket them, don't shoot for bonuses offering them, and don't reforge for them. Dodge and parry just do not offer the same level of survivability that a haste playstyle will. (Not that it matters, they're getting the axe as gear stats in Warlords.)

Further reading: here's a link to a guide going over what enchants to use in what slot and what gems to use for each socket type.

The rotation, in brief

The protection paladin rotation is based on a simple priority system, and is pretty easy to execute all in all. Both single-target and AOE are focused on a system of generating (or building) holy power via Crusader Strike/Hammer of the Righteous, Judgment, and Grand Crusader procs, and then spending it through Shield of the Righteous and Eternal Flame/Word of Glory. Also, please note that this rotation information comes from Theck, the godfather of protection paladins. Once you're more comfortable with the class, his blog is an amazing resource.

Sidenote: It's always good policy to "bank" two holy power as you work your way through an encounter. Because we can hold up to five holy power (thanks to Boundless Conviction), and only spend three at a time, waiting until five holy power to spend any makes sure you're 2/3s of the way to firing off an emergency SotR or EF in a pinch.

Because Avenger's Shield hits like a truck and gives holy power when Grand Crusader procs, I usually just fire it whenever the proc is up.

Shield of the Righteous and Eternal Flame/Word of Glory are all off the global cooldown, so you can use them whenever and thus shouldn't follow a priority.

AoE priority
Similar to the single-target priority, except you swap out Crusader Strike for Hammer of the Righteous, and push Consecration and Avenger's Shield up ahead of Judgment for when you want extra AoE DPS.

While Seal of Righteousness offers some AoE damage, it's usually best to just stick with Seal of Insight for both single and multi-target.

Get to know your cooldowns

A good hallmark that can distinguish a good tank from a bad tank is how wisely they use their cooldowns. Cooldowns are some of your most important abilities -- they shave off damage from huge incoming hits and give your healers breathing room to get your health topped off after eating one of those gigantic attacks.

The trick to cooldowns ultimately is knowing when in a fight a cooldown is best used, and which cooldown is the best choice for a particular situation, both of which require some research in advance. The best way to learn the ins and outs of our cooldowns is to use them, so don't be afraid to abuse the hell out of them!

Let's take a look at our cooldown abilities and when they work best.All that said, any fresh level 90 paladin tank should have a good handle on the entry-level ins and outs of their new character. Next week we'll talk about what the first steps should be to start gearing up, as well as some more advanced stuff to grow into when more comfortable with the spec.

The Light and How to Swing It shows paladin tanks how to combat the Sha in the strange new land of Pandaria. Try out the new control gearing strategy, learn how to make the most of the new active mitigation system on your tankadin, and check out how to deck out your fresh 90 tank to get ready for any raids!
In this article: boosting-paladin, level-90-boost, paladin, paladin-enchants, paladin-gems, paladin-glyphs, paladin-protection-the-light-and-how-to-swing-it, paladin-rotation, paladin-stats, paladin-talents, protection-paladin-the-light-and-how-to-swing-it, tanking, tanking-cooldowns
All products recommended by Engadget are selected by our editorial team, independent of our parent company. Some of our stories include affiliate links. If you buy something through one of these links, we may earn an affiliate commission.