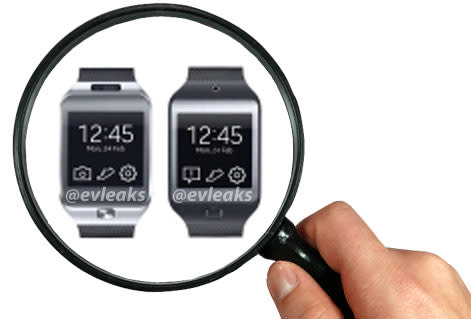 It definitely looks like a new Galaxy Gear. There's definitely two of them and... that's most of what we can discern from what appear to be some cannily sniffed-out thumbnails from, well, somewhere. According to @evleaks, they'll be known as the Galaxy Gear 2 and the Galaxy Gear Neo. Samsung's branched off its Galaxy phone range in a similar way, and if that's any indicator, the Neo smartwatch will be a cheaper model with presumably some hardware drawbacks to go alongside that discount price tag. If you squint extra hard, you should be able to make out a physical button below the screen, with the one on the left (presumably Gear version two), getting more of the metallic design love than its stablemate. Are they really running on Tizen? Has Samsung solved the battery gripes of its first smartwatch launch? These important answers (alongside some higher res images, please) should be mere days away.

In this article: galaxygear, galaxygear2, galaxygearneo, leak, mwc2014, samsung
All products recommended by Engadget are selected by our editorial team, independent of our parent company. Some of our stories include affiliate links. If you buy something through one of these links, we may earn an affiliate commission.