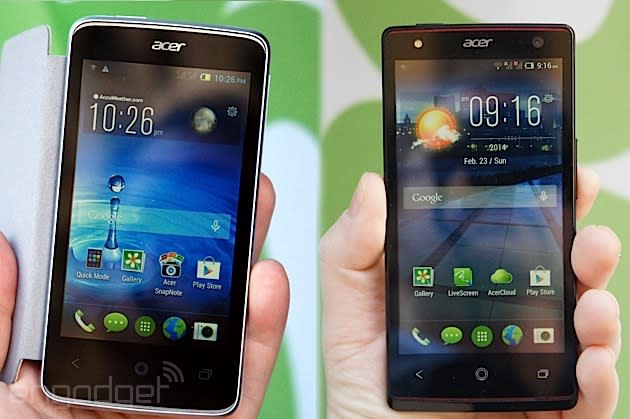 Last week, Acer announced its latest budget smartphones ahead of Mobile World Congress, and as expected those devices are making an appearance at the show. We guessed that the €199 ($275) Liquid E3 is looking to go toe-to-toe with the Moto G in terms of specs, while the €99 Liquid Z4 ($135 or so) fights it out with a whole host of low-end handsets. With a 4.7-inch, 720p IPS screen, quad-core 1.2GHz processor, 1GB RAM, 8GB of internal storage and 13-megapixel rear camera, the Liquid E3 is clearly the more exciting of the two, but head past the break where we take a closer look at both of Acer's new Android phones. Perhaps the most interesting addition for both is a user-mappable rear button, which Acer lovingly refers to as "AcerRAPID." With this button you can launch apps, toggle different "user modes" or answer a call. Hold it a little longer and you'll launch the camera, which can be tweaked to make use of the E3's 2-megapixel front camera with a dedicated flash. Acer's certainly going for a more premium feel with the E3, opting for a metallic red effect on the bezel that gives it a slightly more racy look. We took a peek at Acer's new user modes, which include basic, senior and classic settings (not that Acer wants to put you in a box), and while they were Windows Phone-like in appearance, selecting apps, navigating menus and changing additional settings was overly difficult. The E3's HD display seemed adequate, but lacks in comparison to other devices in its class, especially the Moto G (with its lower price point). The Liquid Z4 sports a round-edged design we've seen on plenty of other phones. The budget handset boasts a 5-megapixel rear camera, but most of its other internals are unsurprisingly basic in nature. The Z4 sports a subtle AcerRAPID button on its reverse, which is a nice inclusion considering its very low price. Acer's also bundled its Liquid UI on both of its new devices, and navigating the phone in default mode (the way you'd normally enjoy Android) was fluid and responsive. However, we couldn't help but think that the company's latest tweaks have arrived a little late to the party.

Can the Liquid E3 hold its own against the Moto G? In our opinion no. Not only are Acer's UI tweaks functionally basic, both devices ship with Android 4.2.2 (although KitKat will reach the E3 "later this year"). Acer's hands-off approach in the US market means we might not even see either of these new devices when they eventually go on sale in April.

In this article: acer, liquid, liquid e3, liquid z4, mwc2014
All products recommended by Engadget are selected by our editorial team, independent of our parent company. Some of our stories include affiliate links. If you buy something through one of these links, we may earn an affiliate commission.