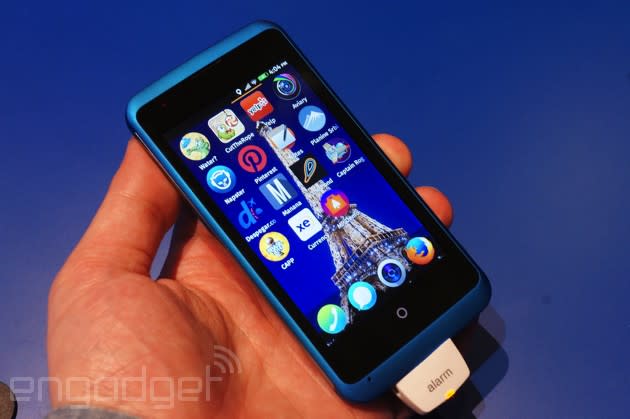 We knew the Open C was coming before the start of Mobile World Congress because, well, ZTE spilled the beans on it early. And here at Mozilla's press event, we're finally getting a first look at the diminutive 4-inch device and the 1.3 build of Firefox OS it runs. But before you judge its modest specs too harshly, bear in mind these FFOS devices are geared towards emerging markets and are priced accordingly.

Owing to its budget nature, the Open C sports a chunky plastic build and, from the looks of the two models we saw on display, will be available in Mozilla's two signature colors: orange and blue. The handset's equipped with a 4-inch WVGA display and runs FFOS 1.3 atop a dual-core 1.2GHz Snapdragon 200 with 512MB of accompanying RAM. There's also a 2-megapixel fixed focus camera on back and 1,200mAh battery powering it.

Update: ZTE just informed us, the Open C will come in a total of six colors, including black, white and fuscia. Go pick your favorite!

On the whole, Firefox OS 1.3 seems much the same as in its previous incarnations, but we've been assured by ZTE's reps that this new build focuses on enhancing stability and performance. Certainly, in our brief time with the Open C, we didn't notice any crashes or sluggish behaviour when browsing the UI and launching its HTML5 apps, but that's something only extended real-world use can attest to properly.

Mozilla's said before that we won't be seeing its FFOS handsets coming to the US anytime soon, so don't expect the Open C to make an appearance stateside. That said, ZTE's assured us the Open C should launch in Q2 of this year, though pricing has yet to be determined.

In this article: FirefoxOS, FirefoxOS1.3, hands-on, mobilepostcross, mwc2014, OpenC, ZTE
All products recommended by Engadget are selected by our editorial team, independent of our parent company. Some of our stories include affiliate links. If you buy something through one of these links, we may earn an affiliate commission.