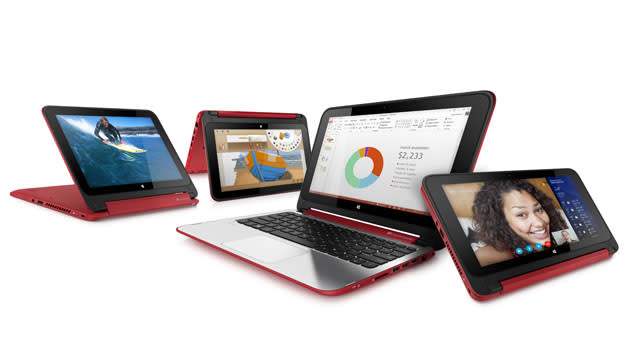 If imitation is the sincerest form of flattery, Lenovo ought to be tickled right now. HP just announced the 11-inch Pavilion x360, and it takes more than a few cues from Lenovo's iconic Yoga design. Not only does it have a 360-degree hinge allowing it to be used in four modes, but HP is even using the same terminology to describe how it works (think: "stand mode" for when the keyboard is folded under, and "tent mode" when the machine balanced upside down). Also like the Yoga, the keyboard disables automatically when you flip the screen back into tablet mode.

So how is it different? Cost, really. Whereas most Windows convertibles command flagship prices, the x360 starts at $400. (For comparison's sake, even Lenovo's mid-range "Flex" convertibles still cost $549 and up.) Of course, a lower price means lesser specs, which in this case include a Pentium-series Intel Bay Trail processor, a 500GB hard drive (no SSDs here) and a 1,366 x 768 display. On the bright side, the display uses IPS technology for wider viewing angles, and HP also included Beats Audio. So the sound quality, at least, might be better than what the Lenovos of the world have to offer. Three USB ports and a full-sized HDMI socket might further sweeten the deal for prospective buyers. As for battery life, HP isn't yet saying how long the two-cell battery is expected to last, though a company rep did assure us the final runtime would exceed four hours (on a portable, three-pound laptop, we'd actually hope for more than that). Look for the x360 to ship this week, on February 26th, with a red color available to start, and a silver shade following later. In the meantime, we're sure to get a peek at Mobile World Congress, so stay tuned for hands-on photos and some early impressions.

In this article: hp, HP Pavilion x360, HPPavilion x360, mwc, mwc2014, pavilionx360, x360
All products recommended by Engadget are selected by our editorial team, independent of our parent company. Some of our stories include affiliate links. If you buy something through one of these links, we may earn an affiliate commission.