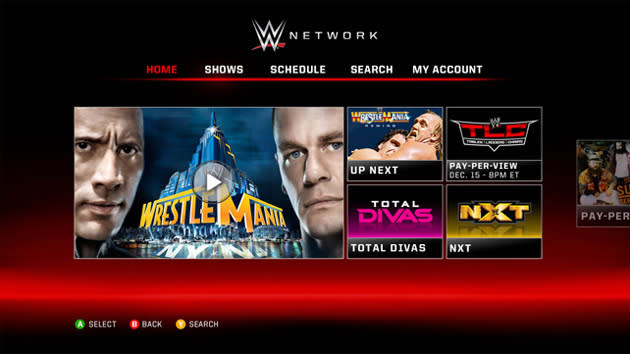 WWE promised that Americans would be watching body slams and piledrivers on a myriad of devices toward the end of this month, and that moment is finally at hand. WWE Network apps are now available in the US for almost every major platform under the sun, including Android, Apple TV, iOS, PlayStation 3, PlayStation 4, Roku players, Xbox 360 and Xbox One. In all cases, you'll pay $10 per month to stream live wrestling events as well as beyond-the-ring content like documentaries and classic matches. The app also serves as a second screen companion when you're watching live TV shows. International grappling fans will have to remain patient, however -- WWE Network won't reach other countries until late 2014 or early 2015.

In this article: android, appletv, hdpostcross, ios, playstation3, playstation4, ps3, ps4, roku, secondscreen, television, tv, wrestling, wwe, wwenetwork, xbox360
All products recommended by Engadget are selected by our editorial team, independent of our parent company. Some of our stories include affiliate links. If you buy something through one of these links, we may earn an affiliate commission.