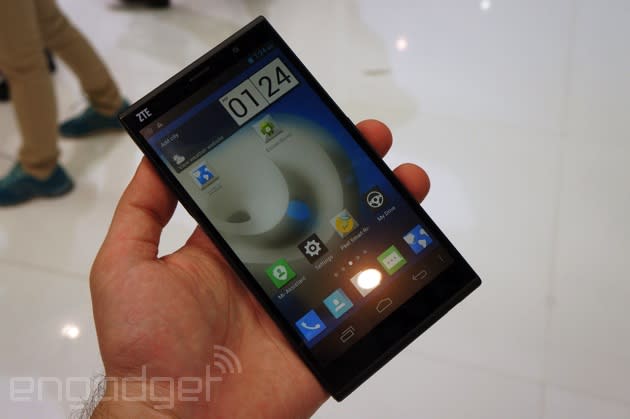 ZTE's back with yet another take on the sans stylus phablet it introduced at Mobile World Congress last year, except this time, the device isn't touting a world's first with its Qualcomm CPU. The Grand Memo II LTE marks the company's second attempt at the smartphone category created by the Galaxy Note and G Pros of the world with a 6-inch 720p display, 13-megapixel rear camera and 7.2mm thickness. To ZTE's credit, it's whipped up quite a sleek and attractive plastic design, marked by a grooved, reflective backplate. Not only is the handset ultra slim, but also its curved edges and thin bezels somehow conspire to make the device appear slighter than its massive size.

Inside, the Grand Memo II LTE sports a Snapdragon 400 processor buffered by 2GB RAM and a 3,200mAh cell to power all the pixels on that 6-inch display, as well as radios for Bluetooth 4.0, 802.11a/b/g/n and GPS. It's also only available with 16GB of internal storage, which is surprising given its otherwise outsized reputation. You'll be glad to know the Grand Memo II LTE currently runs Android KitKat 4.4, although that OS is hidden beneath ZTE's MiFavor 2.3 UI.

In truth, ZTE's particular Android skin isn't that offensive, though we were warned by reps on the show floor it also wasn't a final build and that features could change. What's curious is that the Grand Memo II LTE's two major software additions are exact clones of the ones we saw LG debut on the G Pro 2 just yesterday. For ZTE, that would be SmartShare and miniview. By enabling the SmartShare button from within the app, users will have access to an onscreen shortcut that's triggered with a long-press of the back button. This floating icon, when selected, brings up an app window that's geared toward multitasking. So users need only drag and drop their desired apps to the two halves of the screen. Those windows can then also be adjusted according to user preference.

The second function of the SmartShare icon is that of miniview, which works much like it sounds -- it creates a smaller version of the screen so you can manipulate the Grand Memo II LTE with one hand. Much like on the G Pro, that mini window can be resized and easily dismissed via an icon in the upper-left corner.

Given that the Grand Memo II LTE is running atop a Snapdragon 400, performance was competent, but nowhere near as immediate and responsive as we would've liked. And the TFT LCD panel ZTE's opted for doesn't do the Grand Memo II LTE much justice either. Even at full brightness, we could barely make out the contents of the intensely glare-prone screen.

The Grand Memo II LTE, as you've probably guessed, is very much targeted for release in China and the company tells us to expect that launch sometime this April. Other territories are apparently on deck for the Grand Memo II LTE's release, but ZTE hasn't divulged much more than that about its future plans or pricing. Still, if you like what you see, you can always head to a reputable importer and get your fix.

In this article: 13Megapixel, androidkitkat, grandmemo2, grandmemo2lte, grandmemoiilte, hands-on, mobilepostcross, mwc2014, phablet, snapdragon400, video, zte
All products recommended by Engadget are selected by our editorial team, independent of our parent company. Some of our stories include affiliate links. If you buy something through one of these links, we may earn an affiliate commission.