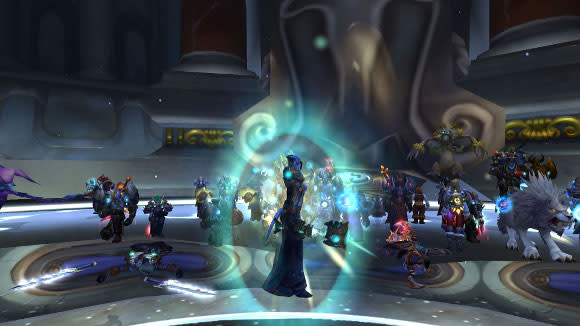 So, I've been playing this game for a long time. I mean, since before the game actually went to retail. I'm an old man at this point, at least in game terms. I've been around for the good times and the bad times, the highs and the lows and everything in between.

For officially four of those many years, I've been writing here at WoW Insider. A dream job for me for sure, and one I'm very grateful to have landed. Over the course of that time though, both in terms of just game time and of writing blog posts, I've dolled out and received a ton of advice. As always it came with the caveat that your mileage may vary, but I like to think it's been good more often than not over that time. But, in all my years of playing and writing, there has been one bit of advice that I received that has been by far the best advice I've ever received, and the best I can ever give.

What is this sage advice?

So I'm sure you're wondering what exactly this sage advice is that has transcended a decade of game time? So, many moons ago, when 16 year old nerd me walked into a geek shop for the first time, I was greeted by the wonderful world of tabletop RPG gaming. I found may way into a D&D game, and I was a little nervous at first because everyone wanted me to play the cleric and focus on healing. I had never played a spell caster in any game before really, and it was very daunting for me. It was a lot to take in. i was a little nervous about letting people down and screwing up and causing the party to die because I had no clue what I was doing. The GM, John Reese, turned to me and he said;

"Just try. Doesn't matter if everyone dies or if you mess up. Just try it."

Now, that sounds cheesy, but it was sound advice. Years later, when I was getting ready to heal my first 40-man raid zone of Molten Core, not going to lie I was pretty nervous. I was worried, once again, that I would mess up and cause a wipe or let someone die or something horrible of that nature. My good friend Cayle hit me up and told me "just try. Doesn't matter if you mess up, just try it. It's only a game". So, here we are, years later hearing the same thing. Honestly, it's great advice, and it's probably the best thing I can ever tell someone ever considering healing as is never be afraid to try it. Just do it! You can read a million articles and watch a million videos and it doesn't amount to a hill of beans unless you go and try it for yourself! You are probably sitting there and laughing a little bit at the notion, but you'd be surprised how many emails I get in an average week from the new player asking how they should break into healing, how they should start. There's a certain trepidation when it comes to tanking and healing because they are viewed with such scrutiny. in a raid of 25 you only have so many healer and so many tanks, with the rest being this roiling sea of DPS. Trust me, it's a lot easier to jump in and blend as DPS, but again, the best advice I can give is just try it. You can try Proving Grounds, Dungeons, Heroics Dungeons, Raid Finder, Flex and Normal Raids! You have so many options now! Try it.

Curious about how a new talent will work for your healing rotation? Try it out! Take it for a spin. Curious how moving stats around will work for you? Do it up and get in a group and test it out! Fear not! What's the worst that happens? You wipe? Honestly, that's not that bad. You learn from it. You learn from everything you try and fails as well as everything that you try and succeeds. Honestly, this is how I live my in game life. I'm constantly trying different gear or different talents on various bosses or encounters. Even my recent foray into PVP, I hadn't done it in a very long time, but I just wanted to try it. Turns out I still enjoy it, and I wouldn't have known if I didn't give it a shot.

Never used Totemic Projection and you want to see if you can effectively use it to aim and place Capacitor Totems? Try it out! See if you can do it, you won't know until you do. Don't wait until you see someone write about it, or post a video about it or anything like that. Try something. Planing and plotting is great, and you can always crunch numbers and figure out theoreticals, but at the end of the day, if you don't try something, you will never know if it will actually work. It's a simple piece of advice that has governed my gaming career both with pixels and with everything not pixels. As far as I'm concerned, well, it's the most important piece of advice you will ever receive.

Totem Talk: Restoration lends you advice on healing groups, DK tanks and heroics and mana concerns in today's endgame -- or take a break and look back at the rise of the resto shaman. Happy healing, and may your mana be plentiful!
In this article: featured, guide to shaman, resto, Resto-Shaman, restoration, restoration-shaman, restoration-shaman-column, restoration-shaman-totem-talk, shaman-healing, shaman-restoration-column, wow-shaman-info
All products recommended by Engadget are selected by our editorial team, independent of our parent company. Some of our stories include affiliate links. If you buy something through one of these links, we may earn an affiliate commission.