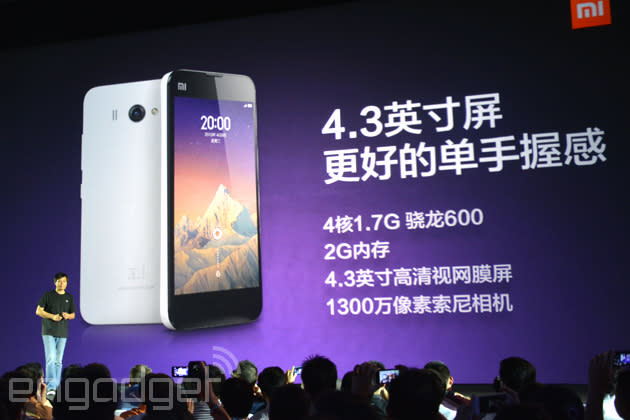 While Xiaomi's been pushing its budget Redmi Android phone into Singapore recently, it's also managed to reach a new shipment record for its mid-tier MI2 series, which includes the MI2, MI2s and MI2a. According to the company's announcement, it has now shipped over 15 million of these devices, which is a notable jump from the 9.19 million figure announced at the MI3 launch back in September. To celebrate this occasion, Xiaomi has reduced the price of the 16GB, 8-megapixel MI2s in China from CN¥1,699 (about $280) to just CN¥1,299 (about $210). The 32GB version with a 13-megapixel camera remains at CN¥1,799 ($290), which is just less than the 16GB, CN¥1,999 ($330) MI3. All of these are still very attractive prices of their specs, of course.

In response to this price drop, Meizu swiftly announced that its 16GB MX2 RE (refurbished edition) is now also priced at CN¥1,299, whereas the MX2 enhanced edition is now at CN¥1,599 ($260). It's unclear how long this bloody fight will last for, but here's hoping that these price drops will be applied outside China as well.

In this article: android, china, mi2, mi2a, mi2s, miui, mobilepostcross, mx2, mx2re, phone, shipment, snapdragon600, xiaomi
All products recommended by Engadget are selected by our editorial team, independent of our parent company. Some of our stories include affiliate links. If you buy something through one of these links, we may earn an affiliate commission.