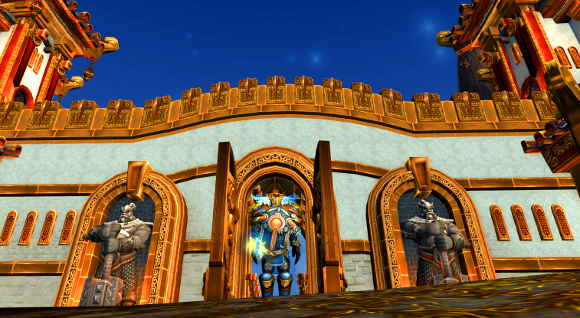 It's always weird coming to the end of an expansion and seeing the road before you suddenly much shorter than you remember it was the last time you gave it a serious look. Very soon things will radically change -- the gear that made us gods will be obsolete, health pools will be laid low, and the stats that we had come to loathe will be no more. As they say, all good things must come to an end. Pandaria is no different.

This is a path we've walked before, in the twilight of every expansion. As the content winds down in its own interminable fashion, and we run that end raid for the umpteenth time, we find solace in trying new experiences through the prism of alts. As I discussed in last week's post, with the advent of the boosting feature, many folks will be trying out paladin tanks for the first time -- especially since they now have the advantage of skipping the (painful) journey of leveling a tank entirely. This guide is for them.

Gearing up to actually gear up

A boosted level 90 will start with a slew of iLevel 483 greens, which is great, though still shy of what you'll need to get into Siege of Orgrimmar LFR. Completely fresh 90s will have a slightly more daunting path ahead of them.

Thankfully there's a slew of low-hanging fruit to pluck when it comes to introductory loot, which makes it possible to be just about completely decked out in purples by the end of your 90's first week (if you have the time and fortitude to get all this done). For starters, you can jump into this chain which will take you through the two newest scenarios and then up Mount Neverest to eventually earn these 502 boots.

As soon as you manage to score 1750 justice points from running dungeons for sweet, sweet valor, you can buy this terrible trinket from your faction's vendor in Krasarang Wilds (once you open that base). In any case, since you can only get one trinket from the Timeless Isle, this will be a good-ish stopgap for hitting any LFR iLevel requirements. I suppose you can at least reforge the dodge to haste, so there's that! In addition, there's a ring for 1250 justice points which you can grab.

And speaking of the Timeless Isle, the rest of your new protection paladin's free time will likely be spent there, racing off for every distant rare mentioned in general chat, and killing Gulp Frog after Gulp Frog after Gulp Frog. Please consider farming the Isle as retribution, if possible, or at the very least in a group -- everything has a ton of health, probably too much for a fresh 90 to contend with, and doing that content solo as prot will try your soul.

Between having alts spend coins and mailing over BoA Timeless Plate Armor Caches and finding individual Timeless Plate pieces, you'll hopefully be able to farm up a somewhat complete set of randomly generated armor. Make sure to switch your loot specialization to retribution before you transform those pieces into actual gear, so you don't get saddled with dodge/parry garbage.

A weapon and a shield are some of the hardest things to find outside of an actual raid. Thankfully, Mistweaver Ai has this mace and this shield for 10,000 coins each. Theoretically possible to do in the first week, just don't burn yourself out in your zeal.

This Blazing Chest on the Timeless Isle has a 100% drop chance of a Burden of Eternity, which can be used to create a 535 piece of gear. I'd recommend using it on a helm, for gem slot reasons.

Lastly, on the Isle, make sure you run at least one celestial and Ordos every week (if you can) for a shot at really high level gear. If you're having trouble finding groups on your server, Open Raid and the addon oQueue are both excellent resources for decent PuGs.

Make sure to run a heroic scenario once a day, if possible, for a shot at a 516 iLevel piece (including a weapon). The very first heroic scenario you run with this quest is guaranteed to give you an item, though any further gains become subject to RNG after that.

What valor you get you'll want to spend at the Shado-Pan Assault quartermaster at the Temple of Niuzao. You can get this awesome 522 neck piece in your very first week for 825 valor, since it only requires a neutral reputation to purchase. Other gear requires a friendly rep, so you'll need to run Throne of Thunder to be able to buy them.

Tanking with a Vengeance

One of the things I hinted at in my previous column, but never particularly touched on is Vengeance. If you've never really tanked before, you should understand Vengeance is a very flawed system that has its gross fingerprints on every one of your regular abilities. As you take damage, you gain attack power, which then makes your attacks hit harder and your self-heals heal for more. (Thankfully it's getting changed in Warlords to be a less onerous system, but for now we have to suffer its presence.)

What you must be most aware of is how the output of Sacred Shield or Eternal Flame is directly affected by your Vengeance stacks. If you're not careful, you can feasibly overwrite a high-Vengenace, high-healing/absorbing effect at the wrong time and replace it with a much weaker version.

To prevent this, I'd recommend getting a Weak Aura which tracks your Vengeance level for you and tells you how much attack power you're currently sporting thanks to that awful system. It can help you make more intelligent choices when it comes to refreshing your SS/EF. Theck has an awesome Weak Aura string at his blog which gives you an easy-to-parse display to determine optimal times to refresh SS/EF. Definitely worth using!

When you start getting into Siege of Orgrimmar gear (especially tier 16 pieces) you will be hitting the level where you want to spec into Eternal Flame. Last week we talked about Sacred Shield and how it's the better choice for a fresh 90 -- conversely, Eternal Flame is the "next level" talent and you absolutely want to talent for it when you can. It's a hugely powerful spell, perhaps even a bit overpowered, to put it lightly.

It also interacts with the Divine Purpose talent in an excellent way, allowing you to refresh Eternal Flame often by getting you to five Bastion of Glory stacks as quickly as possible. This opens up some fun side effects, including making the Glyph of Word of Glory a DPS gain, since you will be casting Eternal Flame a lot. Likewise, because EF is off the global cooldown (unlike Sacred Shield), that frees up at least one GCD every thirty seconds, which gives you more room for fillers (like the talent Holy Prism).

I hope my excitement carries across properly. Once you get geared enough to jump onto the EF wagon, it's like you evolved to the next level of your paladin tank. It changes the way your character executes in an exciting way.

There are two advanced skills/tricks you can learn that can be used to increase your survivability a bit. The first is learning how to properly time your Shield of the Righteous usage on certain bosses. Some encounters will feature telegraphed (ie, on a timer, and thus predictable) physical abilities that hit like a truck. If you take care to hit Shield of the Righteous right before they strike, you can fit that attack within SotR's three second damage reduction window.

The other trick requires a two-line cancelaura macro for your Divine Shield, which is as follows:

To execute this "stupid pally trick" (as it's been affectionately called), you use Reckoning to taunt and force the boss or mob to fixate on you for the usual three seconds. Within that short window you can then use the macro once to put up Divine Shield, eat a powerful attack, and then hit the macro again to clear off the immunity before the boss loses interest and pivots to stomp on that rogue poking its hindquarters.

The bubble-taunt trick requires some precise timing to execute correctly, but it can be a lifesaver at the right time.

I touched on this topic all too briefly last week, but glyphs are actually a significant source of customization as you jump into raids. You should make a point of keeping a stack of Tomes of the Clear Mind on your person at all times, if you end up swapping glyphs as much as I do. Here are the usual five glyphs I find myself jumping between depending on fight to fight and what they are best for:How you glyph won't make or break your ability to tank a fight, but it can pay significant dividends at times. Especially the Divine Protection glyph.

Where to find more information

All that said, this will probably be the last I write about the starting 90 experience -- what with the expansion ending and all the Warlords news to come. If you're looking for more help on this topic, check out the following resources:As always please let me know if I missed anything here you think would be pertinent for fresh 90s. Thanks for the reading, folks, and happy tanking!

The Light and How to Swing It shows paladin tanks how to combat the Sha in the strange new land of Pandaria. Try out the new control gearing strategy, learn how to make the most of the new active mitigation system on your tankadin, and check out how to deck out your fresh 90 tank to get ready for any raids!
In this article: boosting-paladin, level-90-boost, paladin, paladin-enchants, paladin-gems, paladin-glyphs, paladin-protection-the-light-and-how-to-swing-it, paladin-rotation, paladin-stats, paladin-talents, protection-paladin-the-light-and-how-to-swing-it, tankin, tanking
All products recommended by Engadget are selected by our editorial team, independent of our parent company. Some of our stories include affiliate links. If you buy something through one of these links, we may earn an affiliate commission.