Back in 2012, Beats unveiled its diminutive Pill wireless speaker in a bid to steal the Jambox's thunder. Since then, its main rival hasn't exactly been standing still: Jawbone has released two more Bluetooth speakers, including the well-received Big Jambox. Not to be outdone, Dr. Dre & co. recently began selling a super-sized version of their own: the $300 Beats Pill XL. As the name suggests, it is indeed a larger version of the original and it packs a much larger punch in the sound department as well. The list of features is nearly identical too, with NFC, dual 3.5mm jacks, a heavy dose of bass and more than a day's worth of battery life. Heck, you can even use the speakers to charge your phone, should the need arise.

But let's be honest: Bluetooth speakers come a dime a dozen these days. It's not uncommon for press releases on six, seven, eight models to hit our inboxes in the course of a week. Given that the market's so saturated, has Beats done enough to stand apart? And what of this new form factor? Does the increased bulk make the Pill XL too big for its britches? Let's find out. 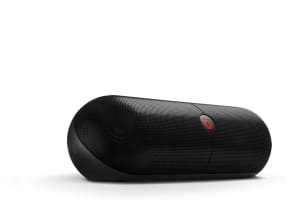 When comparing the Beats Pill XL to the original, the difference in size is obvious. But just how much bigger is it? The device measures 13 x 3.75 x 3.75 inches and comes in at 3.3 pounds. That's 5.5 inches wider and nearly two inches deeper/taller than the standard model, not to mention more than two pounds heavier. While the added stature makes it more difficult to stuff the speaker into the side pocket of a rucksack, the increased size doesn't make it any less portable. It's still compact enough to tote along on a picnic or a day at the beach.

With its all-black digs, the XL generally bears a close resemblance to the smaller unit. If you were hoping for one of the original six color schemes, though, you're in for some disappointment; black is the only option for now. Taking a tour of the device, the XL has a single button on the front bearing the company's iconic logo. This glossy circle not only controls play/pause and track skipping, but it also pulses when it's in pairing mode and glows solid once it's connected. As a side note, you'll enjoy some nice tactile feedback with that button, and it makes very little noise when pressed. Also like the Pill, the XL's front half is all speaker grille, while the back is fashioned out of plain plastic.

Around back, there's a molded handle that houses the rest of the Pill XL's controls and ports. Power, volume controls and battery indicator LEDs are on the right, with the power jack, a pair of 3.5mm input/output sockets, a USB socket and a Bluetooth LED light over on the left. Save for the power plug, those jacks are covered with a rubber flap to keep the dust out. Just to the right of the power switch, another "b" logo marks the NFC area used for pairing two Pill XLs together (more on that later). All of the buttons here are of the soft-touch sort, so there's not much travel.

There are two glossy, smudge-prone panels surrounding the handle, along with a small speaker grille underneath. During our time with the speaker, we didn't make much use of the handle as we preferred to rest the unit on a desk or bookshelf. Speaking of resting, a set of four tiny rubber feet keeps the unit from rolling over and points the speakers slightly upward for improved audio. This allows the XL to project its sound outward a bit better than the Big Jambox does. On both ends, there are two circular receptacles that appear to be buttons, but aren't. These are built-in to accommodate a shoulder strap that can be purchased separately for $30. Inside the box, a power adapter and 3.5mm aux cable are included, but there's no carrying case this time around. With the added heft, we'd expect a significant bump in battery life. Beats delivers. The Pill XL touts up to 15 hours of continuous play with its lithium-ion battery -- almost double the runtime of the regular Pill. Of course, if you're using the speaker to recharge your phone or tablet, the battery life is going to take a hit. Happily, though, the speaker automatically powers off when it doesn't detect a signal for 10 minutes, which should go a long way in conserving juice. All told, we found the battery life was right in line with the company's claim, and those LED indicators did indeed prove handy for tracking remaining power. As far as the rest of the internals go, Beats isn't offering any details -- trust us, we asked. That said, if you take a close look at the front side, you can see four speakers through the grille: two large ones in the center and two smaller ones on the outside. That's all we know since, for whatever reason, Beats isn't disclosing wattage or other specs. Pairing the Beats Pill XL with a phone, tablet or laptop is a breeze. Once Bluetooth is switched on, all you have to do is select the speaker from the device list and start streaming music from the source or service of your choice. If you have an NFC-enabled mobile device, you can tap it against the speaker to pair the two a bit quicker. If you splurge for two XLs, or happen to invite over a friend who also has one, you can tap two of the speakers together to pair them up. Tap them twice to enable stereo mode. All in all, this two-speaker tapping is a bit tougher to pull off, and I was never able to get it right on my first try. Perhaps I just need to practice my technique. Beats lists a range of 30 feet for the wireless speaker, which seems pretty accurate. I was even able to venture into the next room without any interference, but once I put multiple walls between my phone and the device, I began to lose signal. No surprise there. I've lent my ears to quite a few Bluetooth speakers, all with varying degrees of sound quality. Most of my experience, though, has been with Jawbone's Big Jambox and regular Jambox -- neither of which is particularly stellar in the overall tone department. When I first powered up the Pill XL, I expected Beats would be pretty heavy-handed with the bass. If you've tried its headphones, you know what I'm talking about. Indeed, there's quite a bit of low end here, but the mids and highs stay clear, so the sound thankfully isn't muffled. All told, the XL seemed to be at its best when playing hip-hop (again, no surprise), with bass on Kendrick Lamar's "m.A.A.d city" hitting harder than on any other portable wireless speaker I've tested. When I cranked the speaker up to full blast I hardly noticed any distortion, even in close proximity to the unit. And it should be noted: When you're sitting up close, the XL can get painfully loud. If you're across the room, though, it won't make your ears bleed. Needless to say, at comfortable volumes, you won't notice sound degradation.

Once I tried other genres, though, things started to change. Don't get me wrong, the overall sound quality is great, but when I queued up bluegrass (Punch Brothers, to be specific), the upright bass overpowered the rest of the instruments. This meant the folksy tones were blanketed in a driving bass line that killed the vibe. With metal and other heavy selections, it was more of the same. If your favorite Grindcore outfit mixes their albums with a lot of low end, you'll notice muffled sounds. For example, Thrice's The Artist in the Ambulance -- an album that gives preference to driving bass -- sounded muddy when I played it back on the Beats XL. However, Russian Circles' "Memorial" stayed fairly balanced, even in the heavier sections, with crisp snare hits throughout. All of which is to say: The speaker handles nearly hip-hop well, but your mileage will vary with other genres.

When I tested the 3.5mm aux jack, the sound got doused with even more bass. I listened to Phantogram's "Celebrating Nothing" on one unit wirelessly and the other with a cable at the same time, flipping back and forth. The added bass was enough to rattle items on the same shelf as the XL, whereas the Bluetooth option did not. Because of the added low end, the overall sound quality takes a hit when connecting directly. Anything other than hip-hop sounded too boomy for my taste. The Beats Pill XL is also capable of sorting speakerphone calls, and I found the feature to be quite serviceable. I could hear just fine, and those on the receiving end of test calls didn't have any qualms with clarity. When I hopped on the other end, though, the sound from the XL was a little muffled, but still good enough for hands-free or conference calls. I've already mentioned Jawbone several times during the course of this review, so let's start there. The Big Jambox is the Beats Pill XL's direct competitor and to us, it's no contest. I listened to the same tracks on both $300 speakers and there's a huge difference in sound quality. First, the Pill has a lot more clarity, allowing individual instruments and elements to stand on their own. With the Jambox, there's a more distorted, muffled sound, and it's pretty obvious in a side-by-side comparison. The XL can also reach louder volumes before distorting and features a more balanced EQ. This means the ambient noise frustrations we had with the smaller Jamboxes definitely won't be a problem here.

If portability isn't a concern, you might also consider Sonos. The Play:1 and Play:3 wireless speakers are priced at $199 and $299, respectively. Keep in mind, though, that these units have to remain plugged in on a desktop or shelf. You also can't stream content from just any app on your phone as support for the key players like Spotify, Rdio and Pandora comes through the Sonos app. We found the Play:3 favored the bass a bit too much -- a tactic sometimes used to mask lackluster sound quality. The key perk here: infinite expandability. With the Sonos Bridge ($49), you can add on as many Play:1, Play:3, Play:5, Playbar and Sub speakers as you want -- or that your budget will allow. You may recall the company's TV commercial with one unit in each room all blasting the same tune. I went into this review thinking that if nothing else, the Beats Pill XL would be a good choice for playing music at a higher volume than my MacBook Air is capable of. I fully expected it to lean heavy on the bass (which it does) and not much else. After spending a few weeks with it, though, I'm pleasantly surprised by how well it performs. For the money, it blows the Big Jambox out of the water, despite costing the same. Of course, those looking for maximum portability will want to invest elsewhere, as the 3.3-pound unit isn't easy to tuck away.

Ultimately, for me, it came down to sound quality. Even more than the bass, it was the reliable, all-around clarity that charmed me most. Aside from a finicky tap-to-pair option for connecting two speakers, my qualms with the XL are minor. The real question is this: Are you willing to spend $300 for a solid audio option on the go? A few weeks ago, I would've said no, but now, I think it's definitely worth considering.