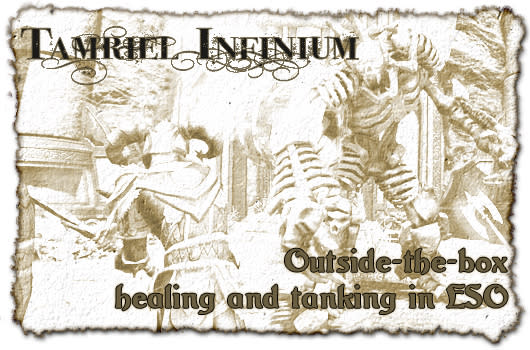 In last week's Tamriel Infinium, I had my top-tier theorycrafter and friend Calls1gn throw together some off-the-wall DPS builds for The Elder Scrolls Online. But he could theorycraft all day, and it wouldn't mean anything if he couldn't put it into practice. Luckily, ZeniMax opened the doors to the ESO beta again this past weekend. I was totally intrigued by the melee Sorcerer with pets. After playing that type of character at low levels, I have to say that it's an extremely lazy class. Now, I didn't have all the abilities because they required a higher-level character, but even at my low level, I mostly sat back and watched my pets do their thing while I found one mob to beat on. It worked and was more than viable.

I asked Calls1gn to build us a few tank and healer classes, too. I wanted a Dragonknight healer because there are few DK abilities that have anything to do with healing, and I wanted a Sorc tank because -- well, just because. He delivered.

Admittedly, the Dragonknight skill trees contain zero healing abilities. In fact, the class abilities don't even augment healing abilities. I had honestly thought I'd given Calls1gn an impossible task. For instance, If you look at the Ardent Flame tree, you can see the AoE DoTs and the CCs, but none of those abilities appears to perform any action that will help out a healer. Draconic Power clearly helps a player tank, but with only one healing ability, it's not a tree worth climbing, especially since that healing ability heals only the player himself. Calls1gn picked the Earthen Heart tree because of its group utility.

The three major healing abilities come from your restoration staff in this build, of course. Light armor and racials can help augment your magicka pool, and the secondary abilities will increase your overall protections. Although healing is your primary function with this build, you will also want to offer as much protection to your allies as possible.

Igneous Shield and Magma Shell (coupled with Protective Shell synergy) grant armor protection to your allies. If you use this build, make sure these are activated as often as possible since they will ultimately make your other work easier. Set up Combat Prayer as your spam heal. Not only will this heal everyone in front of you for a moderate amount, but it will also increase armor and spell resistance for all those affected by your heal. Then, if you need concentrated healing, you can turn to your Healing Springs or Mutagen. Bear in mind that none of these abilities will restore an ally completely from zero, so the idea is to keep everyone topped off. And with the amount of AoE healing and shielding, keeping your group up should be no issue.

I'm not going to spend too much time on this, but I do believe that you should see what a typical tank will look like in ESO. Of course, the primary job is to grab aggro and absorb damage. However, the tank should employ a good amount of crowd control or group protection, too. This actually reminds me a bit of the original trinity from EverQuest of tanking, healing, and crowd control.

Calls1gn has obviously worked on this one for while. In fact, he didn't tell me so, but I believe this will be his main build. Inner Beast (from the Undaunted tree) is designed to grab aggro with Channeled Focus and Defensive Stance building defensive prowess. Radiant Ward and Empowering Sweep damages enemies, hopefully grabbing aggro, and it also shields the Templar as well. The last ability, Radiant Aura, not only increases the Templar's health regen but works as a group heal, too.

Now, let's move on to something a bit less traditional.

This Sorc tank uses mostly light armor. In fact, he has to because his primary shielding comes from the light armor ability Dampen Magic, which creates a damage resistant bubble around the tank. He should likely use that ability as often as possible, along with Boundless Storm, which also increases armor. And like the Templar mentioned earlier, our Sorc tank uses the Inner Beast ability from the Undaunted tree. The other abilities, stemming from three different skill trees, are designed to slow down opponents or self-heal.

At first glance you might not think that this build cannot take damage, but it can. In fact, it should take only 50% of the overall damage, and with the self heal, it can actually stand still just absorbing damage. But what makes this build really great is its mobility. In fact, Boundless Storm increases movement speed as well as armor and spell resistance. And since the primary weapon is a destruction staff, this Sorc can tank from across the room, and if you happen to try this build, don't be afraid to kite.

All of these builds stick to one weapon. That means at level 15, any player who uses these builds can actually switch roles just by by swapping weapons. If you wish, the melee Sorc from last week can instantly change to a tank by sheathing his two-handed weapon and drawing a destruction staff. The Templar tank can stow his sword and shield and pick up a restoration staff changing his role to healer.

My questions this week are obvious: After seeing this, do you believe it's possible for any class to be viable in any role, and what crazy build are you going to try when the game goes live? See you in two weeks!

Traverse the treacherous terrain of Tamriel with Larry Everett as he records his journey through The Elder Scrolls Online, an MMORPG from ZeniMax. Comments are welcome below, or send a message to larry@massively.com. He promises to keep the arrow-to-the-knee jokes to a minimum.