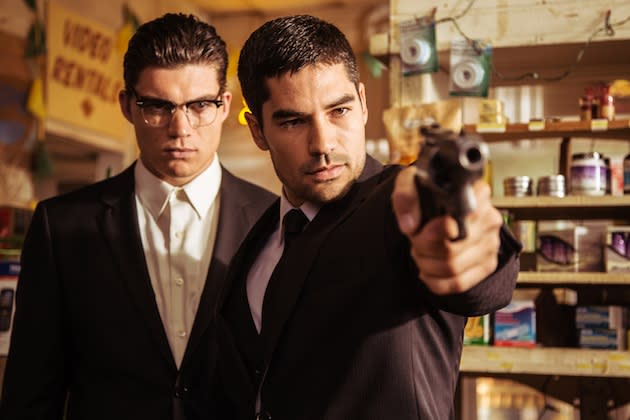 Director Robert Rodriguez is expanding on the story and characters first seen in his cult classic From Dusk Till Dawn with a new TV series, but that's not all there is to it. Here it's the debut original series on Rodriguez's new El Rey Network on cable, but outside the US Miramax has cut a deal with Netflix giving the streamer exclusive rights to all ten episodes. That means this time around Netflix will follow the weekly episode release schedule (like it did with Breaking Bad) instead of bingeing House of Cards-style, bringing new episodes within 24 hours of the US broadcast everywhere except Latin America. The US premiere is March 11th, while in Latin America it will premiere March 19th, with weekly releases after that -- in an unrelated note, Canada's Trailer Park Boys are returning with a whole new season on Netflix later this year.

A renewed Miramax has been a big player in streaming, making an initial US deal with Netflix in early 2011, followed by another one for international streaming rights in the same year. Since then, it's also opened its vaults to Hulu, Amazon Prime and Lovefilm / Amazon Prime Instant Video UK. The new series is debuting this week at SXSW, and according to Rodriguez "the film was the short story, this series is the novel." We'll once again follow the Gecko Bros. as they try to escape across the border after a bank heist and make a detour to a strip club filled with vampires. It's a familiar tale, but this time shoving 10 episodes full of grindhouse-style mayhem instead of a relatively brief two hour movie -- check out the official trailer after the break for a taste.

Everybody be cool. Robert Rodriguez's #FromDuskTillDawn series. New episodes weekly from 12 March. Only on Netflix. pic.twitter.com/vTjfR3ZEWr

@carlcasso Each new episode will arrive on Wednesdays, within 24 hours of being broadcast on US TV.

In this article: FromDuskTillDawn, hdpostcross, miramax, netflix, RobertRodriguez, sxsw, video
All products recommended by Engadget are selected by our editorial team, independent of our parent company. Some of our stories include affiliate links. If you buy something through one of these links, we may earn an affiliate commission.