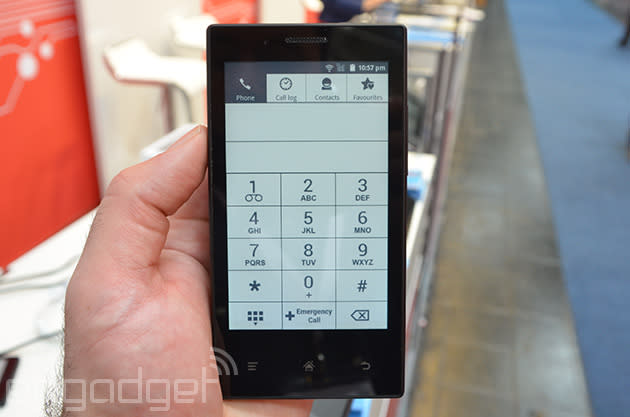 When we reviewed the dual-screen YotaPhone, some of you thought it'd have been better if the device simply skipped the LCD and relied on a single E Ink display instead. Well, that's exactly the approach taken by Onyx (via its Polish distributor, Arta Tech) which is showing off a prototype of the MIDIA InkPhone here at CeBIT. Packing a 4.3-inch front-lit E Ink display (no LCD here), the device is designed as a back-to-basics device for people who need really long battery life or simply those who are looking for an e-reader that can also make calls. Part of the appeal, of course, is that E Ink displays sip power, and the company promises that the InkPhone will last for more than two weeks on a single charge of its 1,800mAh battery. You might not have heard of Onyx, a Chinese e-reader company that has a big presence in Poland -- so much so, that it's the second most popular brand after Amazon's Kindle. For this hardware, since there's no need to provide content for a high-res display, the company can cut some corners on the internals front and reduce the asking price. It's using a low-end Rockchip CPU, an unspecified (low) amount of RAM and only 4GB of on-board storage. There's also no camera, but maybe the microSD card slot that can add up to 32GB more space will salve that wound a little.

When we used it, we found that some of the elements worked really well, with the e-reader app behaving as smoothly and responsive as the Kindle app on a traditional smartphone, although we couldn't say the same about using the device in other modes. In fact, when we tried to swipe between pages on the home screen, there was a wait of up to 20 seconds before it would respond to our commands. There's also the small matter that you won't be able to use Google Play or Amazon's Kindle app (or any other Android app, for that matter) without installing the APK yourself, since the company believes that it can't guarantee the minimum levels of usability and quality that its customers might expect -- especially since a number of e-book apps have animations that won't run well on the display's low refresh rate. Still, if you're up for giving it a go, production is expected to begin toward the end of this month and should arrive on store shelves in Germany and Poland at some point in April. It'll be priced at around €140 ($195) and will also be available via Amazon if you're based elsewhere in the world.

In this article: 2014, CebIT, CeBIT 2014, CeBIT2014, e reader, hands-on, InkPhone, MIDIA, mobilepostcross, Onyx, Onyx MIDIA InkPhone, video
All products recommended by Engadget are selected by our editorial team, independent of our parent company. Some of our stories include affiliate links. If you buy something through one of these links, we may earn an affiliate commission.