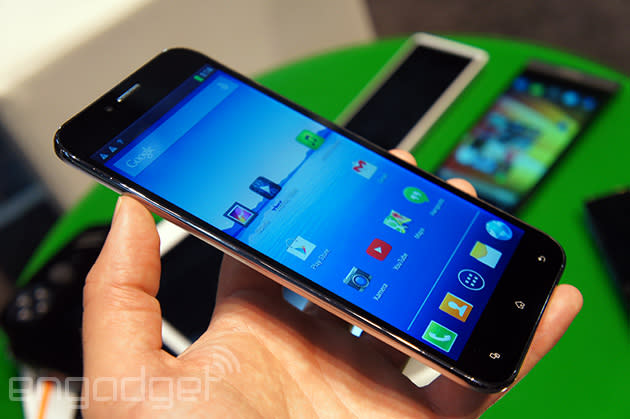 When we talk about smartphones with buttons on the back of the case, most people's thoughts turn toward the LG G2. But now the French electronics outfit Archos has decided to follow in LG's footsteps with the 64 Xenon, a 6.4-inch phablet that puts both the volume and power buttons on the rear side. Packing a 1,280 x 720 IPS LCD display, dual-SIM slots and HSPA+ radios, it's clear that this is designed to square up against the likes of the Galaxy Mega, but with a much lower price tag of 200 euros (around $275). As soon as you get this device in your left hand, you'll notice that the power button is in a great position, right next to your index finger. The volume buttons, by contrast, are meant to be reached with your thumb, but the positioning felt a bit awkward to us -- it's hard to grip the device while applying any pressure to these buttons.

In the performance stakes, we were reasonably impressed by the responsiveness of the quad-core MediaTek MT6582, even though it's a whole generation behind the chip in Archos' other new smartphone. The processor is accompanied by 1GB of RAM and a 2,800mAh battery, which the company promises should last you for a day on a single charge.

On the downside, we were disappointed to see that the company cut a big corner with the internal storage: it's offering just 4GB as standard, which isn't right given how much stuff you're likely to put on this handset. On the other hand, at least there's a microSD slot for storing more content. Still, we're looking forward to putting this hardware through its paces when it launches in April.

Sharif Sakr felt the buttons on his own back for this report.

In this article: 2014, 64 Xenon, Archos, Archos 64 Xenon, CeBIT2014, hands-on, mediatek, mobilepostcross, phablet
All products recommended by Engadget are selected by our editorial team, independent of our parent company. Some of our stories include affiliate links. If you buy something through one of these links, we may earn an affiliate commission.