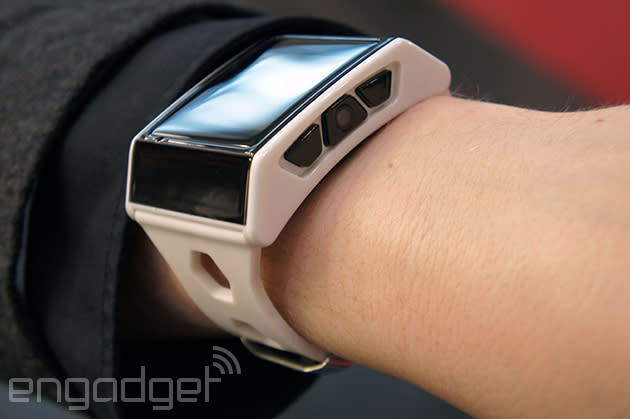 Most smartwatches act as a secondary display for your phone, but there's a select few, like the Neptune Pine, that just want to replace it altogether. It's in this latter category that you'll find the chunky Exetech XS-3: a watch that stands almost two centimeters tall from your wrist. Wrapped in plastic and attached to a heavy-duty rubber strap, the hardware looks tougher than it really is. There's no back cover other than the battery itself, which is exposed to the elements and leaves us concerned as to how sweat-resistant (let alone rain-resistant) this device will be. In any case, it's with the internals and software that things start to get interesting, because the XS-3 comes pretty close to replicating every major function of a smartphone. The XS-3 runs Android 4.0 on a dual-core MediaTek processor with 2GB of on-board storage, while a 3G radio lets you emulate Penny / Dick Tracy / John Sheridan (delete as appropriate). The 420mAh battery may be vulnerable, but it's at least user replaceable, and beneath it you'll find micro-SIM and microSD slots. On standby, the XS-3 will last around 18 hours, but that falls to 6-7 hours if you use it a lot throughout the day, and to just 2.5 hours if you put it to work as a GPS tracker.

Since the device is able to access Google Play, users are able to get some benefit from Google's apps, although we doubt that too many of them will run as efficiently as you're used to, given that the real estate is a 1.54-inch 240 x 240 capacitive LCD touchscreen.

There are two navigation buttons on each side of the bezel, and in the center on the right hand side is a dainty 2-megapixel camera for taking cheeky snaps of your friends or, you know, corporate documents you're planning to steal. The left middle button swings away to reveal the microUSB port, which you'll use to charge the unit, as well as connecting headphones (via an adapter). The XS-3 is currently available in black, with a white version appearing on the Italian company's website in the very near future, priced at €350 ($485).

In this article: cebit, CeBIT2014, Exetech, hands-on, mobilepostcross, Smartwatch, video, Wearable, XS-3
All products recommended by Engadget are selected by our editorial team, independent of our parent company. Some of our stories include affiliate links. If you buy something through one of these links, we may earn an affiliate commission.