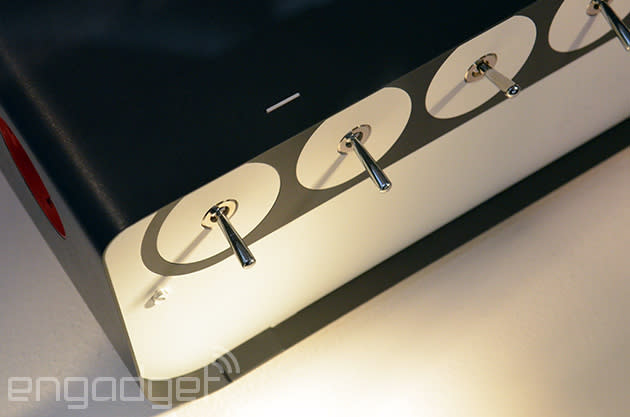 Yes, power strips aren't the sort of thing we usually discuss on this august periodical but sometimes we spot something at a trade show that simply demands attention. Normally, it's the sort of gear that you tuck behind or under your desk, but Korean designer Sangki Kim wanted to make something a little more stylish. That's why he built the Powerdrobe: a box that sits beneath your display (or all-in-one) to keep everything nice and tidy. Kim, who also designed the Desk Phone Dock we reviewed a few years ago, gave the box a classy rounded look and chrome toggle switches, so turning on your computer makes you feel like you work at NASA, circa 1965. On one side of the unit, there's a pair of USB ports for charging mobile devices, while on the other side you'll find either a US or European mains socket, depending on which version you buy. The back offers up either four or six further mains sockets to satisfy your lust for power, with all the mess hidden behind a solid plastic screen. The four-socket model will arrive in April and set you back $40, with the bigger unit coming later and costing a few dollars more. Sharif Sakr flipped some switches for this report.

In this article: 2014, CeBIT, CeBIT 2014, CeBIT2014, hands-on, Kee Utility, Powerdrobe
All products recommended by Engadget are selected by our editorial team, independent of our parent company. Some of our stories include affiliate links. If you buy something through one of these links, we may earn an affiliate commission.