Bend it like robo-Beckham with the U14 Free Kick toy 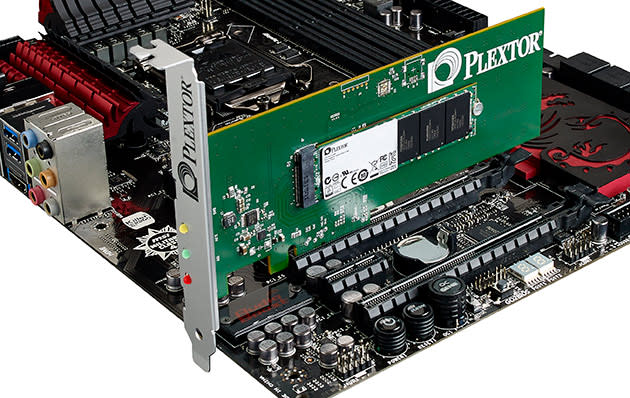 It's been more than a year since we last covered Plextor's wares, but the company's been busy with the next generation of its M-branded SSDs. For the first time, the range includes a premium PCIe option explicitly aimed at gamers, which promises much better speeds by side-stepping the SATA "bottleneck." This card, the M6e, starts at €199 ($275) for 128GB and tops out at €540 ($750) for 512GB, with claimed sequential reads/writes of up to 770/625 MB/s, and random reads/writes of up to 105k/100k IOPS. Plextor says that's a gain of around 50 percent compared to the sequential speeds you'd get from the regular SATA option, the M6S, but of course you're paying for that extra performance: The biggest 512GB M6S will set you back just €332 ($460), for example. We've been told to expect availability "very soon," but in the meantime you can check out some early reviews of the PCIe drive at the links below.

In this article: cebit2014, drive, m6, m6e, m6m, m6s, plextor, SolidStateDrive, ssd, storage
All products recommended by Engadget are selected by our editorial team, independent of our parent company. Some of our stories include affiliate links. If you buy something through one of these links, we may earn an affiliate commission.