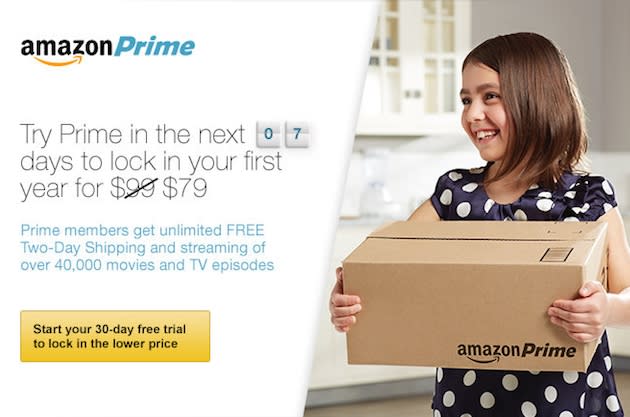 We suspected a price rise was imminent for Prime subscribers in the US, especially after recent changes in the UK, and now we have the details. When you sign up or renew, you'll be charged an annual rate of $99, versus the steady $79 charge that has been in place since the service first launched. An email to Prime members vaguely attributes the increase to rising fuel and transportation costs, as well as to the general expansion of streaming content and e-book lending. There's a get-out clause if you're quick, however: New subscribers who sign up for a free trial within the next seven days will be able to lock in the old price for a year. Beyond that, there's no good news except that the increase wasn't larger. In what could turn out to be a clever bit of expectation management, Amazon had previously warned that it could raise the subscription by as much as $40.

In this article: amazon, amazonprime, prime, subscription
All products recommended by Engadget are selected by our editorial team, independent of our parent company. Some of our stories include affiliate links. If you buy something through one of these links, we may earn an affiliate commission.