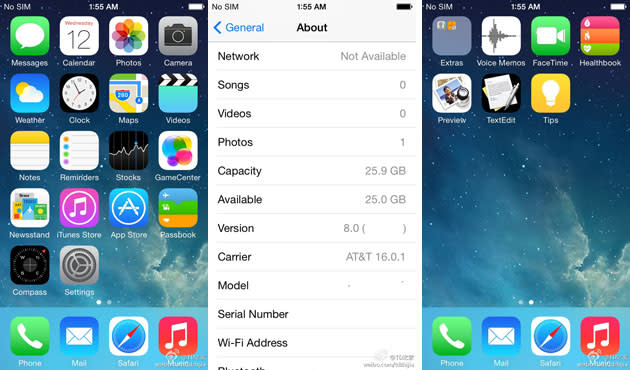 Apple's next version of its mobile operating system, iOS 8, looks an awful lot like the iOS you've already got on your iDevice. At least that's according to screens leaked on Chinese microblog site Weibo and lent credence by veritable Apple site 9to5Mac, which show what is supposedly iOS 8 in action. Yes, square icons with rounded edges are back, but that design is wrapped around some new entrants in the app world: TextEdit, Preview and Tips. It's easy to guess what the first one might be (a potential replacement for the Notes app), but Preview? Given the icon's distinct resemblance to the application of the same name in OS X, we're guessing this serves a similar function: viewing documents and PDFs. As for Tips? Well, that's probably just a solution for introducing new users.

iOS 8 isn't an official product just yet, but logic and history dictate it'll be part and parcel of the next iPhone refresh. We've previously heard that health will feature prominently in the next version of iOS, with both an application named Healthbook and some form of integration with the M7 chip already built into the iPhone 5S. Of course, Apple's staying mum for now, and, again, history dictates it'll be a few more months before Cupertino's ready to talk.

In this article: apple, ios8, leak, preview, textedit, tips, weibo
All products recommended by Engadget are selected by our editorial team, independent of our parent company. Some of our stories include affiliate links. If you buy something through one of these links, we may earn an affiliate commission.