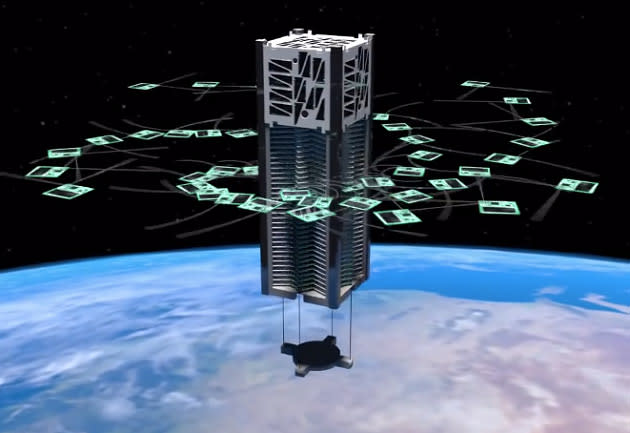 It began with a Kickstarter project in 2011. This Sunday, KickSat creator Zac Manchester will see his poker chip-size satellites take flight when they launch from Cape Canaveral to an altitude of about 200 miles. More than 100 of the Sprite free-flying spacecraft will orbit the Earth as part of a technology demonstration. Each satellite includes a gyroscope, magnetometer, a Texas Instruments microcontroller, a radio, two antennas and solar cells for power. Once the Sprites are deployed from the KickSat cube sat on April 1st, the system will transmit telemetry packets that can be picked up by basic ham radio equipment back on Earth.

Update: NASA has pushed back to the launch to March 30th.

Eventually, individuals could purchase their own Sprite, with launch costs split between multiple owners. Since the tiny devices enter a low-altitude orbit, they'll likely re-enter Earth's atmosphere within a few days or weeks, eliminating the potential for space debris. The KickSat is expected to last a bit longer, burning up within a few months of launch. Check out a rendering of the deployment process in the video below.

In this article: kicksat, satellite, space, sprite, sprites, video
All products recommended by Engadget are selected by our editorial team, independent of our parent company. Some of our stories include affiliate links. If you buy something through one of these links, we may earn an affiliate commission.