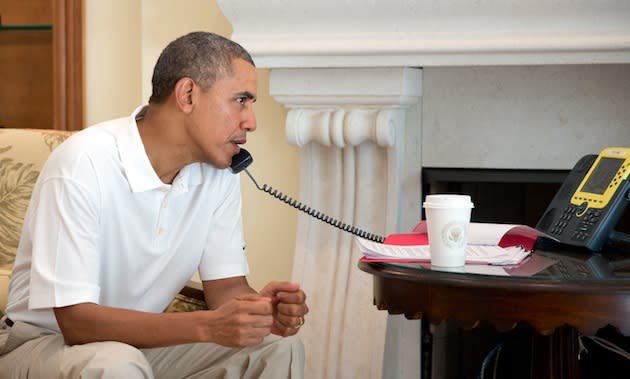 Yesterday a report from The Intercept exposed NSA documents apparently showing how it could infect "millions" of computers with malware and even masquerade as a Facebook server. Now, Facebook CEO Mark Zuckerberg and the NSA have both published responses, with decidedly different takes on the situation. Zuckerberg took to the site to discuss how important trust is on the internet, calling the reports confusing and frustrating, and said he called President Obama directly (pictured above speaking to President Francois Hollande of France last week) to express those feelings. While he waits for "true full reform," he says Facebook is working on making its services more secure with encryption, secure protocols for traffic, and helping others resolve issues in their services.

Meanwhile, or perhaps in response to Zuck's direct call, the NSA's Public Affairs office posted a statement (PDF) calling the reports inaccurate. According to the agency: "NSA does not use its technical capabilities to impersonate U.S. company websites. Nor does NSA target any user of global Internet services without appropriate legal authority." Check out the full statement and see how it compares to the documents published yesterday for yourself, but after the last year or so of leaks, it's pretty tough to just take the NSA's words at face value.

Post by Mark Zuckerberg.
In this article: facebook, malsware, malware, markzuckerberg, nsa, prism
All products recommended by Engadget are selected by our editorial team, independent of our parent company. Some of our stories include affiliate links. If you buy something through one of these links, we may earn an affiliate commission.